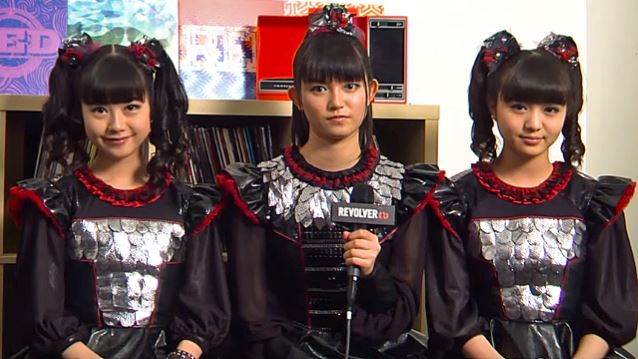 Revolver magazine's Chris Enriquez recently spoke to the Japanese teenage girl pop metal band BABYMETAL about headlining Wembley Stadium, playing the legendary Tokyo Dome, their new album "Metal Resistance", and their appearance on "The Late Show With Stephen Colbert". You can now watch the chat below.

"Metal Resistance" debuted at No. 38 on The Billboard 200, having shifted 12,914 equivalent album units in the week ending April 7.

BABYMETAL also became the become highest-charting Japanese band ever on the U.K.'s Official Albums Chart, with "Metal Resistance" landing at No. 15. It has also charted in France, Germany and Japan.

"Metal Resistance" was released on April 1 via RAL/Sony Music Entertainment in the U.S. and earMUSIC in Europe. The CD features songs that have already been performed live, as well as many never-been-heard-before new songs.

Asked by Fuse about the inspiration behind recording the song "The One" in English, Su-Metal said: "Through our concerts and tours, we learned that our music is capable of bringing people together, breaking borders and genres. To symbolize all of that, we decided to sing 'The One' in English. During the recording, it was really hard, but I remember all of our fans abroad learning Japanese to sing along with us at our concerts, it gave me the motivation to do my best in this challenge."