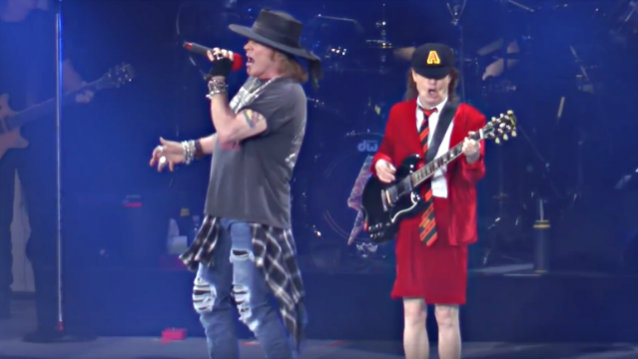 Fan-filmed video footage of AC/DC's September 14 performance at Madison Square Garden in New York City can be seen below.

In his review of the Madison Square Garden concert, Newsday's Glenn Gamboa wrote: "Questions about how well Rose could handle the material were quickly answered, as he powerfully delivered classics like 'Back In Black' and older cuts like 'Rock 'N' Roll Damnation' that the band rarely has touched since original lead singer Bon Scott died in 1980. However, make no mistake, Rose was not the focus of the 'Rock Or Bust' show. [Guitarist Angus] Young was. Rose would settle into the background when he wasn't singing, letting Young have the spotlight to himself."

Angus recently said that he has not made a decision yet regarding AC/DC's future once the current "Rock Or Bust" tour cycle ends. Following the 2014 retirement of his brother and co-founder Malcolm Young due to dementia, Angus also dealt with the exit of drummer Phil Rudd later that year because of legal problems, and more recently the departure of singer Brian Johnson because of hearing loss and bassist Cliff Williams's decision to retire after the tour ends.