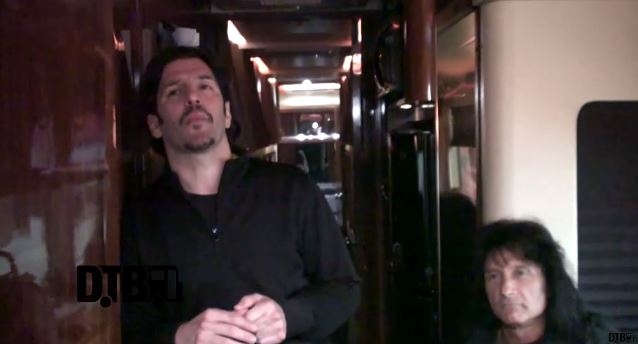 Each episode of Digital Tour Bus's "Crazy Tour Stories" features a touring act giving you all the details about one or more wild things that have taken place while on the road. In the episode below, which was filmed on May 20 in Chicago, Illinois, ANTHRAX bassist Frank Bello and vocalist Joey Belladonna recount one of their crazy stories from touring.

ANTHRAX's new album, which is due in early 2016, is once again being produced by Jay Ruston (STONE SOUR, STEEL PANTHER). The CD will include such songtitles as "The Battle Chose Us", "You Gotta Believe" and "The Evil Twin".

ANTHRAX drummer Charlie Benante told Pop-Break.com about the upcoming album: "We have a title in mind and we have a concept for it and everything. One of the first songs that written for the record, the title became 'You Gotta Believe'. It had a part two to the song that I called 'The Evil Twin', because it reminded me of the other song and they flow so well into each other. Those two songs, they're both old-school thrash metal songs, but they're done in a modern way. Those are two of my favorite songs on the record and they're long and really ferocious. There's another song that clocks in at seven minutes and it's one of my favorite songs on the record, because it takes you on a musical journey. I'm really excited about some of these longer songs, and, of course, the songs that are fast are just extremely aggressive. I'm just happy about the way this is all coming out."

ANTHRAX recently completed a six-week North American tour with VOLBEAT. The band's setlist included the new song "Soror Irrumator (Lords Of The Rock)", ANTHRAX's contribution to the the second installment of "Catch The Throne: The Mixtape", for HBO's Emmy- and Golden Globe-winning series "Game Of Thrones".