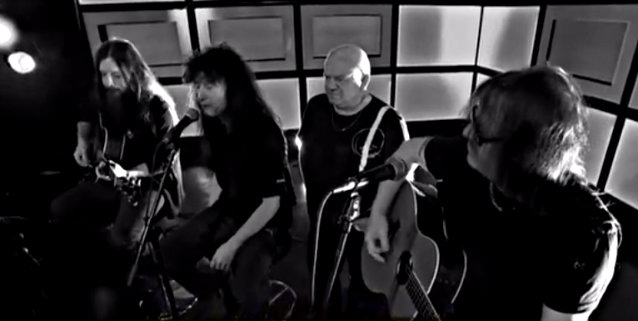 "Metal All Stars" musicians Joey Belladonna (ANTHRAX), Ross "The Boss" Friedman (MANOWAR), Udo Dirkschneider (U.D.O., ex-ACCEPT) and Jasin Todd (SHINEDOWN) took part in an interview and a performance of an acoustic cover version of THE ROLLING STONES classic "You Can't Always Get What You Want" during an appearance on this morning's (Thursday, March 27) edition of the "Nyhetsmorgon" program on Sweden's TV4 channel. You can now watch the segment below.

The "Metal All Stars" played their first-ever show to a sold-out Arena Armeec in Sofia, Bulgaria on March 23. The lineup of musicians performing at the event included:

Philip Anselmo (PANTERA) and Nick Menza (ex-MEGADETH), who were originally scheduled to take part in the tour, have pulled out of the trek. Menza has since released a statement claiming that "the agreement made between the 'Metal All Stars' and myself wasn't kept." He added: "For my best interest, my manager Robert Bolger pulled me off the tour." Also absent from the current "Metal All Stars" dates is Conrad "Cronos" Lant (VENOM), who is "very ill and under doctor's orders not to travel or perform," according to a statement released by his management. "Cronos is hoping to join the 'Metal All Stars' shows as soon as possible."

Vince Neil (MÖTLEY CRÜE) will be joining the "Metal All Stars" tour at later dates.

The "Metal All Stars" musicians performed metal classics from their own catalogs as well as classics by BLACK SABBATH, IRON MAIDEN and more.

"Metal All Stars" plans to tour South America later in 2014.