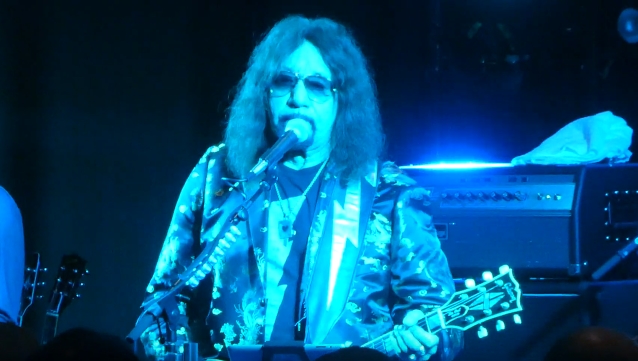 Former KISS guitarist Ace Frehley celebrated the 40th anniversary of his acclaimed solo debut by performing the album for the first time in its entirety on the final day of the New Jersey Kiss Expo 2018, which took place December 7-9 at the Hilton Parsippany in Parsippany, New Jersey.

Co-produced with frequent KISS collaborator Eddie Kramer, "Ace Frehley" is widely hailed as the best of the four KISS solo albums released simultaneously in 1978. It peaked at No. 26 on the Billboard 200 and outsold the solo efforts of his three bandmates.

Regarding how the decision to perform all of "Ace Frehley" came about, the guitarist told BUILD Series: "It came from the people putting the event together and some of the people who work for me. They all said it would be a great idea, and I said, 'Yeah, I think it would be,' so we're going to make it happen."

In addition to a trio of songs ("Snow Blind", "Ozone", "Wiped-Out") that reflect Frehley's extracurricular interests at the time, the album includes a cover of HELLO's 1975 song "New York Groove", which reached No. 13 on the Billboard Hot 100 singles chart and remains a staple of the guitarist's live performances today.

During a recent "live conversation" at Hollywood's Musicians Institute, Frehley discussed his goals for the album. "I just wanted to make the best record possible," he said. "I had a revelation after all four albums came out and mine became the most successful — pretty much there's this voice in my head going, 'Ace, you know you're a lot more creative away from those guys than you are with them.' That was kind of the beginning of the end for me, because I realized that I could make a lot better music away from Paul [Stanley] and Gene [Simmons] and Peter [Criss] than I could with them. But I was also drinking and doing a lot of drugs, so that could have affected my decision-making."