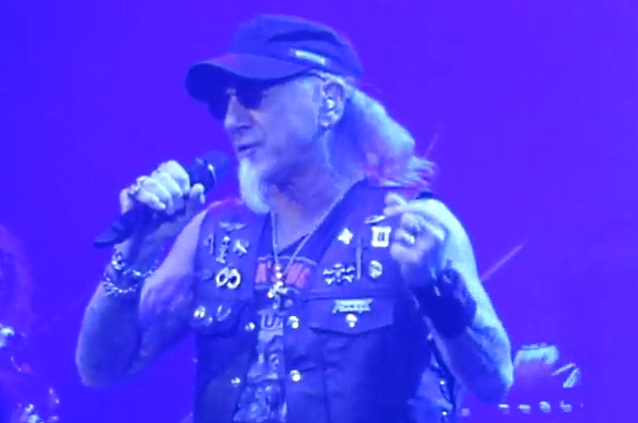 German/American metallers ACCEPT launched the "Symphonic Terror Tour" on April 20 in Wuppertal, Germany. The trek sees the band accompanied by a symphony orchestra, presenting such ACCEPT anthems as "Princess Of The Dawn", "Breaker", "Fast As A Shark" and "Metal Heart", as well as to newer songs like "Stalingrad", "Shadow Soldiers" and "Teutonic Terror".

Fan-filmed video footage of ACCEPT's April 27 concert in Saint Petersburg, Russia can be seen below.

ACCEPT performed with an orchestra for the first time at the 2017 edition of the Wacken Open Air festival in Wacken, Germany. The concert was professionally recorded and filmed and released last November as a live set, "Symphonic Terror - Live At Wacken 2017", via Nuclear Blast.

"This was a mash-up of intensity and precision," guitarist Wolf Hoffmann said about the fusion of heavy metal and classical music. "The fans are extremely open-minded, but I was nervous 'till the last minute before the show anyway. After all, it's still a metal festival! But I think that, after many years of ACCEPT combining both worlds, fans have started to really accept this concept."

Earlier in the month, ACCEPT announced the addition of Martin Motnik on bass and Ava-Rebekah Rahman on violin.

"We were overwhelmed and honored by the musicians who auditioned for the open position," said Hoffmann. "The level of talent we saw was unprecedented, and we believe Martin Motnik is a perfect fit as he'll be joining us for the 'Symphonic Terror' tour and upcoming ACCEPT shows."