"Electric Punishment", the video for the title track of of the new album from San Francisco Bay Area metallers VICIOUS RUMORS, can be seen below. The CD was released on April 29 in Europe and May 7 in U.S./Canada via Steamhammer/SPV.

Guitarist Geoff Thorpe, vocalist Brian Allen, bassist Stephen Goodwin and drummer Larry Howe were supported during the new CD recording sessions by guitarist Thean Rasmussen, who returned to the VICIOUS RUMORS fold after "Razorback Killers". In addition, Thorpe & Co. invited a number of former allies to the studio as guest musicians: Brad Gillis features on "D-Block", "Together We Unite" and "Eternally", Marc McGhee on "Escape (From Hell)", and last but not least, tour guitarist Bob Capka helped out at the studio with a number of rhythm guitars and a haunting solo on "D-Block". Thorpe said: "I had a few problems with my fingers; that's why I was glad that Bob was there to help. Otherwise, it probably wouldn't have been possible to stick to our tight production schedule."

VICIOUS RUMORS released a live album, "Live You To Death", on November 27, 2012 through SPV/Steamhammer. The CD was recorded by Pontus Norgren of HAMMERFALL, mixed by Juan Urteaga and produced by VICIOUS RUMORS guitarist Geoff Thorpe.

VICIOUS RUMORS will kick off the "American Punishment Tour" on September 19 in Oklahoma City, Oklahoma. Support on the trek will come from SEVEN WITCHES and POWER THEORY. 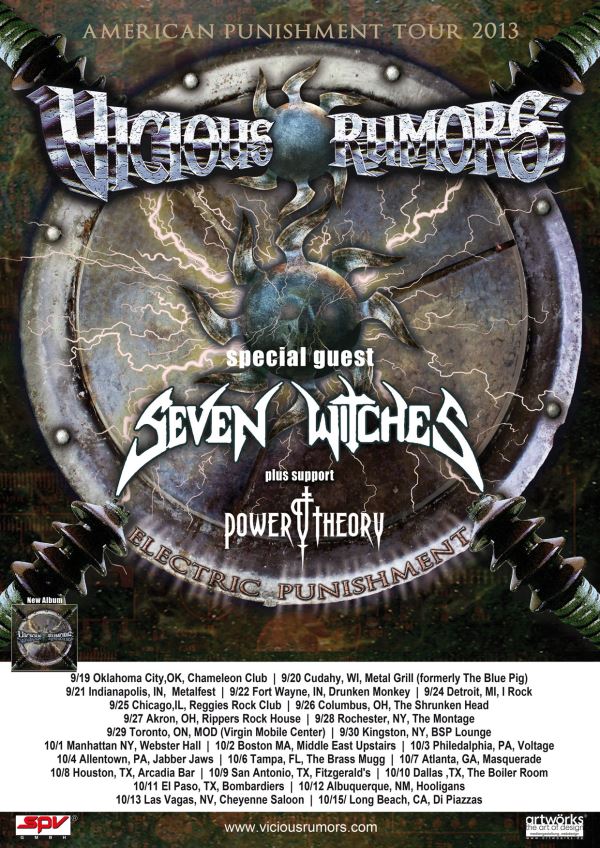