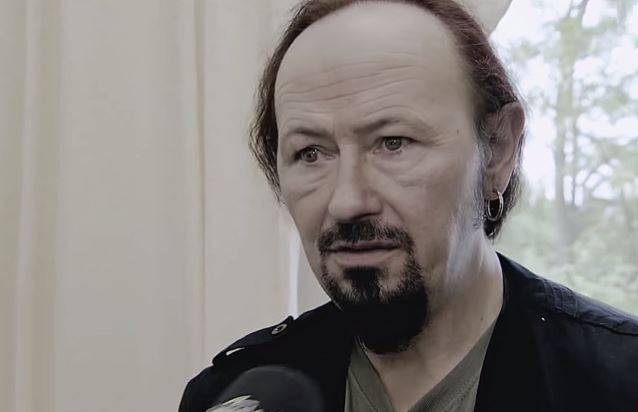 British black metal pioneers VENOM were interviewed by Conny Schiffbauer of Germany's WDR "Rockpalast" prior to the band's May 22 performance at the Rock Hard Festival in Gelsenkirchen, Germany. You can now watch the chat below.

Cronos (bass, vocals): "People didn't understand it back then. But, in saying that, the album we've just released, 'From The Very Depths' and 'Fallen Angels' [2011], [are] selling a lot more copies than 'Black Metal' [1982], so… Back then, people didn't understand the music, so they didn't really… There wasn't very many people who liked it, who got into it. It was really underground. There was a lot more hype around that album. We've had kids coming up to us and saying, 'I don't like 'Black Metal'.' It's a very dated album, and unless you're from that period, it's difficult to get into. That's why we play some of the songs live — so people can understand it. But I prefer the newer stuff anyway."

Cronos: "We're not gonna sit back here with candles and crucifixes. I mean, we're normal people. But then we put on a show. So we like to have a divide between that. You know, I mean, actors are the same. Gary Oldman played Dracula in a film, but if you met him for an interview, he wouldn't be sitting there with fangs."

"Yes, we have the imagery, but, like, with the music, it's a lot to do with the message of… We sort of grew up in an age where all the jobs and work and everything were all crumbling around us, so you've really gotta dig deep and find out what you wanna do with your life and how you're gonna get on. It's about having your own mind. And that's where the Satanism bit comes in. It's like having your own thoughts — not being told what to do, not being led. You guide your own life. You're here once — you're born, you live, you die, so in that bit in the middle, do your fucking best."

On whether it's true VENOM was influenced by QUEEN:

Cronos: "Yeah, and T. REX and [DAVID] BOWIE and JETHRO TULL and RUSH. All the stuff that came out in the '70s, that was all the inspiration for what we do today. We like to evolve the ideas. It's what's wrong with a lot of bands — when they are exactly the same as the other bands. And then, who wants two of any one band? There was a lot of bands, especially in the '80s, coming out who were very much like JUDAS PRIEST, or very much like BLACK SABBATH, or very much like DEEP PURPLE. Well, you can't beat those guys, 'cause they are the gods. They are the people we all look up to. So who wants a small version of that? Nobody. So, we tried to create a new image to fit what we did.