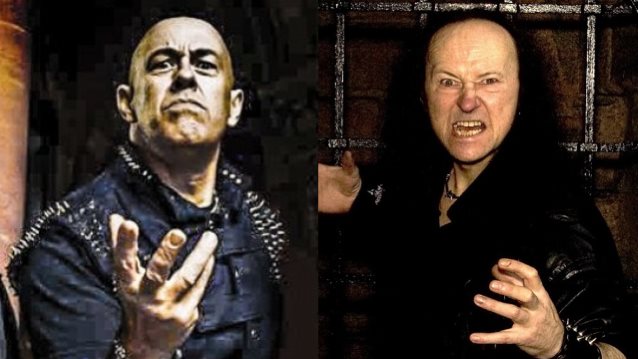 During a brand new interview with Heavy Metal Mixtape, VENOM INC. bassist/vocalist Tony "Demolition Man" Dolan was asked for his thoughts on his band being called a "pale imitation" by members of the Conrad "Cronos" Lant-fronted version of VENOM, which is continuing to tour and make albums under the VENOM moniker. Dolan said: "[I have] no thoughts at all. [Cronos] can moan for the rest of his time, if that makes him feel happy. We are just doing our thing, and the rest is of no importance."

As for "not seeing eye to eye" with Cronos with regards to the use of the VENOM name, Dolan said: "Well, we just tell the real story. He chooses a kind of strange series of alternating facts.

"The official biography on his site that he administers himself has changed six times in ten years, so it is hard to keep up, to be honest.

"He does what he does and hopefully he still does it well, but beyond that, we don't care.

"The name [VENOM INC.] was given to us, and the logo we use is the one Abaddon [former VENOM and current VENOM INC. drummer] designed originally with the addition of 'Inc.'

"We don't do as he does and spend time in interviews and onstage to audiences, disrespecting anyone... It's just not who we are."

Mantas told Westword in a 2016 interview that he is well aware of a possible confusion fans may feel about the existence of two similarly named bands performing many of VENOM's classic songs.

"To be perfectly honest, we're letting the fans decide," Mantas said. "There are a few hardcore Cronos fans, but I think every little battle that we have, we're winning. Everybody that we meet after the show say that we are the true VENOM, this is what they've been waiting for. Everybody who I have spoken to who has seen the other version basically said that the heart, the soul and the spirit of VENOM is with us."

He added: "Cronos is doing what he does. The last few interviews I've seen, all he does is attack us in the press and call us names, and he's got his little minions, his guitarist, calling us a pale imitation, and it's like, actually, you're playing my parts and Abaddon's parts. So who's the fucking tribute band around here? But we don't want to get into that. Like I say, we're letting the fans decide. At the moment, the fans are deciding firmly in our favor. That's great. It shows a hell of a lot of loyalty, and I have the utmost respect and thanks."

VENOM INC. recently inked a deal with Nuclear Blast. The band's debut album is tentatively due later in the year.

Mantas told Westword that VENOM INC. will "go right back to basics" on the upcoming disc. He explained: "It's going to be fucking rock and roll, and what VENOM was all about. We're not planning to look at the first few albums and say that we need a song like 'Welcome To Hell' or 'Countess Bathory'. We're just going to do what we did in the early days, and that's strip everything back and just write. I think everybody's going to like it. I think they're gonna get a fucking shock — let's put it that way."