Swedish black metallers VANMAKT have finished recording their second album, "Ad Luciferi Regnum" (rough translation: To the Kingdom of Lucifer), at EPM Studios with producer Björn Lindgren. The CD will be mixed and mastered by Tore Stjerna at Necromorbus Studio (WATAIN, SETHERIAL) for a tentative late 2008/early 2009 release via Pulverised Records.

According to the band, "VANMAKT will now take a break for a couple of weeks before we start the tryout for the drummer spot. We have three candidates at the moment, and hopefully one of them got what it takes."

VANMAKT's debut album, "Vredskapta Mörkersagor", features guest appearances by Jonas Renvaktar (SPAWN OF POSSESSION) on the song entitled "Open the Gates" and Hebbe from SKALD on the track "En Mardröm, En Strid, Ett Helvete". VANMAKT also filmed a video for the song "My Darkest Hate", which can be viewed below. 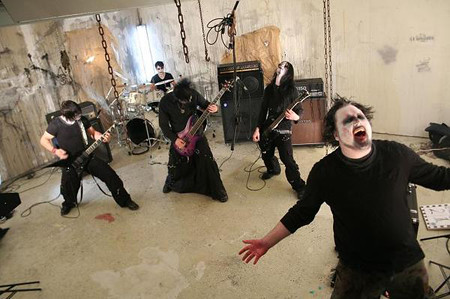