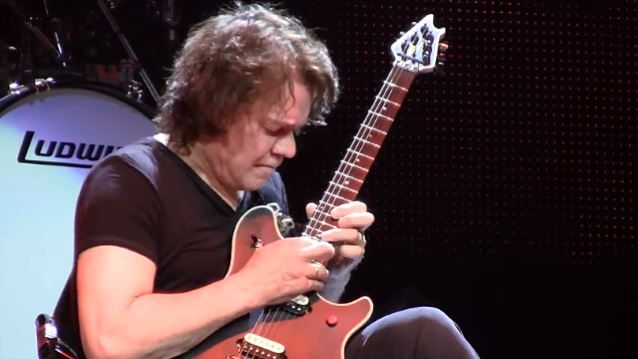 Eddie Van Halen and Alex Van Halen of the legendary rock group VAN HALEN have signed an exclusive worldwide deal with Atlas Music Publishing, as announced today by Richard Stumpf, CEO of Atlas Music Publishing. The deal covers the band's entire catalog except for VAN HALEN's last album, 2012's "A Different Kind Of Truth", and includes multiple hit singles and albums that have collectively sold close to 90 million copies worldwide, making the group one of the best-selling musical artists in history. The landmark deal with Atlas marks the first time VAN HALEN's music has been published by an independent music publishing company.

Stumpf commented: "VAN HALEN were the reason I first became an avid music fan, so it is both professionally and personally humbling to have Ed and Al join the Atlas family.

"Not many can say they defined a sound that would change the course of rock history — the Van Halens can.

"We are honored that these musical pioneers have chosen us to represent their songs for years to come. We will help ensure that new generations of music listeners are keenly aware of just how important VAN HALEN is to the music world and how incredible their songwriting is. Nobody combines melody and musicianship like Ed and Al."

The VAN HALEN catalog epitomizes and pioneered good-time rock and roll songs that are relatable, crowd anthems constructed with a strong sense of melody and musicianship. Through the deal, Atlas Music Publishing will now administer such all-time favorites as "Everybody Wants Some!", "Runnin' With The Devil", "Hot For Teacher", "Unchained", "Dance The Night Away", "Panama", "Jump", "Ain't Talkin' Bout Love", "Eruption" and many more.

VAN HALEN has been keeping a low-profile ever since abruptly canceling its 2012 tour with singer David Lee Roth.

VAN HALEN is expected to release a live album on March 31 called "Tokyo Dome Live In Concert". Recorded on June 21, 2013 at the Tokyo Dome in Japan, the set features 23 tracks taken from all seven albums the band recorded with Roth as frontman. It will also include tracks from the group’s 2012 reunion effort, "A Different Kind Of Truth".