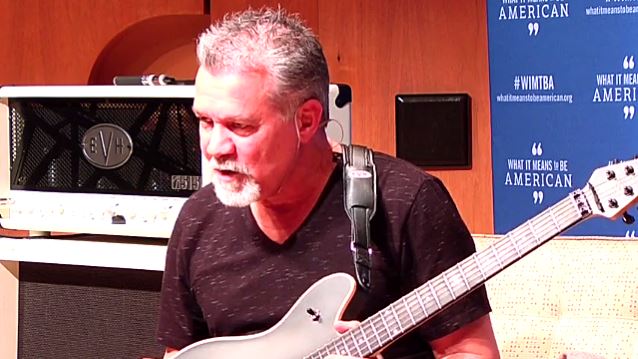 In a new interview with The Washington Times, VAN HALEN guitarist Eddie Van Halen revealed that the band came up with the idea of issuing a new live album after his first two ideas for a release didn't come to fruition.

"We were trying to figure out what to do since we didn't have time to put a studio record together," Eddie said.

"What I originally wanted to do was remix the original 25 song demos. That would have been really cool. But the tapes are lost. They are gone. So that was out the window.

"Then we started digging through bootlegs from the club days. We tried our best to make those sound good, but ultimately it wasn't good enough to put out. The quality of the recording was so bad that we tried to enhance them and make them better. Once we made them better, you lost that fly-on-the-wall aspect of it. It just didn't jibe. So we decided, 'How about a live record?'"

According to Eddie, singer David Lee Roth chose a June 2013 Tokyo concert from "a couple of hundred" archived shows that were captured using a Pro Tools rig.

"[Drummer] Alex [Van Halen], [bassist] Wolfgang [Van Halen] and I were pretty consistent every night. For a singer, it's more difficult. Dave said, 'How about Tokyo Dome?' We said, 'Fine!'"

Released on Tuesday (March 31), "Tokyo Dome Live In Concert" features 23 songs taken from all seven albums the band has recorded with Roth on the mic, including 2012's reunion effort, "A Different Kind Of Truth".

The new live set is available in double-CD, four-LP and digital formats. A deluxe edition includes remastered versions of the band's 1978 self-titled debut album and 1984's "1984" — both of which are also available separately.

VAN HALEN recently announced the dates and cities for a summer/fall North American tour that will kick off on July 5 in Seattle, winding down on October 2 in Los Angeles. Tickets for the trek go on sale this Saturday (April 4) at Ticketmaster.com and LiveNation.com.

Newly remastered versions of VAN HALEN's other classic Roth-era albums "Diver Down", "Women And Children First", "Van Halen II" and "Fair Warning" are being prepared for release in the spring.

VAN HALEN's only previous live offering, "Live: Right Here, Right Now", was released in 1993 and featured vocalist Sammy Hagar, who replaced Roth in the band after the latter first left in 1985.