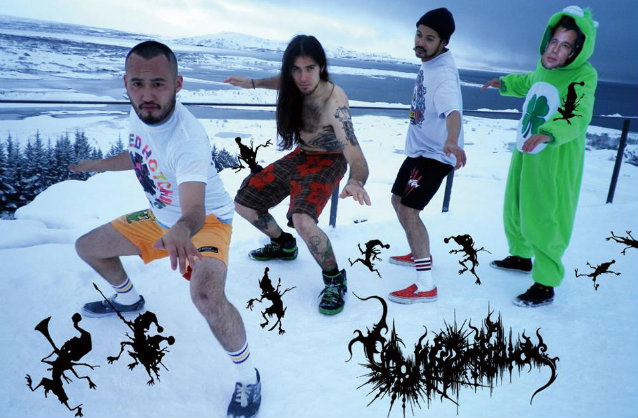 The Japanese metal scene is well known for its imaginative and often eccentric approach. It is rich and varied with new alternative and experimental bands appearing and collaborating often. Breaking through the crowds is Osaka-based "brutal orchestra" VAMPILLIA.

Trying to put VAMPILLIA into a neat genre box is almost impossible but when you factor in original band member Yoshikawa Toyohito is an ex-member of Japanese experimental noise rock collective BOREDOMS, you begin to get a sense of the sublime madness contained within VAMPILLIA's Candlelight Records debut, "Some Nightmares Take You Aurora Rainbow Darkness", which was produced and recorded by Ben Frost at Greenhouse studios, well-known as Bjork and SIGUR ROS's studio in Iceland.

Recently VAMPILLIA welcomed drummers Tatsuya Yoshida from Japanese noise duo RUINS and Talow The Tornado from hardcore band NICE VIEW to the group and they, alongside Toyohito, perform alongside a cast of ten (sometimes more) musicians to create an "experimental pop-style brutal orchestra." Chaotic vocals, discordant guitars, beautiful piano, elaborate strings, unsettling noise and several powerful drum sounds are harmonized as one into a sound the band calls "a beautiful chaos."

"We hope the music gives a strong impression of overwhelming speciality and mysteriously universal sounds," the band says.

Watch the video for "Endless Summer" below.