VADER's 25-year anniversary gig, which scheduled for August 30 at Stodola Club in Warsaw, Poland, is officially sold out, according to a posting on the Polish band's web site.

Says the Massive Music booking agenecy: "When we started to plan this show at the beginning of the year, we didn't expect such overwhelming interest! Now (actually, a month before the show) we would like to announce it's sold out! Despite the fact we could move the show to a bigger venue, sell more tickets (and earn more money), we don't want to do it. Why? Because this show is being organized exclusively for diehard fans. We look forward to celebrate this anniversary in a best possible way — playing great shows together with invited guests. Don't worry, VADER is ready to play around two-hour gig (with bassist Reyash from SUPREME LORD who debuted at the Woodstock festival before 250,000 fans!)"

The billing for the show is as follows:

VADER will play a two-hour-plus set, featuring songs from old demo tapes as well as the more popular tracks from the group's recent studio albums. The show will be filmed for an anniversary DVD, tentivately titled "XXV" (to be released in 2009). The band will prepare not only a special live set, but also a special stage design and other surprises. 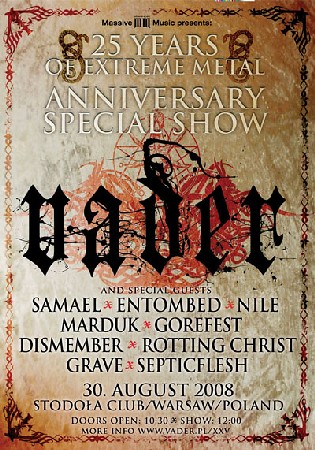