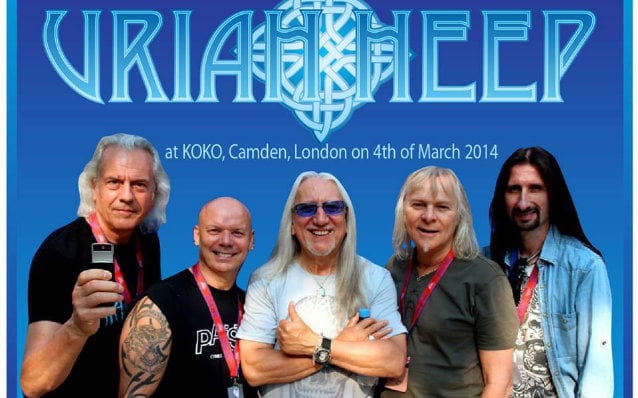 Progressive rock legends URIAH HEEP have announced a very special one-off show at Koko, in Camden, London, England on March 4, 2014. All URIAH HEEP fans are urged not to miss out on the filming. Tickets are already on sale priced at £24 from eventim.co.uk.

This show will be filmed and released as a live DVD on Frontiers Records in later 2014/early 2015. As well as a host of HEEP classics, the set will also include some new songs that will be taken from the material that the band is writing for the forthcoming 2014 album, following 2011's "Into the Wild", which was the band's highest-charting album since the 1970s in worldwide territories!

Fans attending the show will be in with a chance of being filmed themselves, not only as part of the audience, but also for some special bonus features to be included on the DVD. The band is inviting their fans from around the world to be a part of this experience; this is a chance to be part of HEEP history.

Guitarist Mick Box said: "After playing in 54 countries around the world promoting 'Into The Wild', it's great to be coming back to London where it all began!"

2014 is set to be yet another big one for Mick Box and the band as they work on the new material, and of course keep on touring; HEEP has been round the world several times in the last 24 months visiting South Africa, Australia, Asia, North America, South America and East & West Russia. The band headlined the first-ever Planet Rock Stock in December.

HEEP will play the prestigious Sweden Rock Festival in the summer.

The Koko show will follow a set of intimate U.K. February dates and another headliner at the Giants Of Rock festival on February 9.