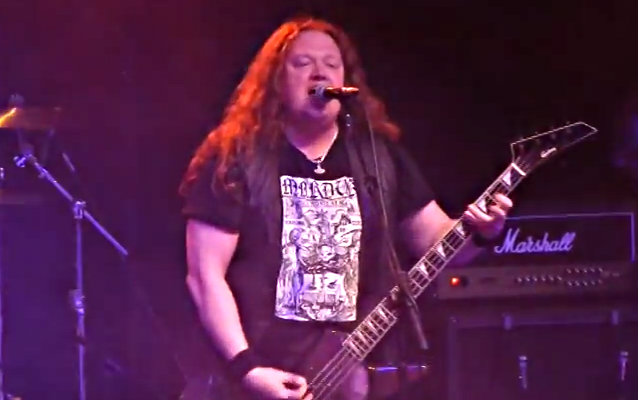 A two-camera fan-filmed mix of UNLEASHED's March 15 performance at this year's Hammerfest, which was held at Hafan y Mor Holiday Park, Caernarfonshire and Merionethshire, Wales, can be seen below.

UNLEASHED's new album, "Odalheim", was released in April 2012 via Nuclear Blast Records. The CD was produced by Fredrik Folkare and recorded in at Chrome Studios in Sweden.

With "Odalheim", UNLEASHED not only presented the follow-up to "As Yggdrasil Trembles" in the year 2012, but also continued telling its post-doomsday story, embedded into the Norse mythology.

After the mighty world tree Yggdrasil had trembled and rung in the end of the world, Fimbul winter followed: Three years of darkness and coldness, during which Mother Nature took back what was rightfully hers. This caused the end of life as we know it. Ragnarök. But the warriors who've survived will build a new world out of the old one's ashes. Right here, the story of "Odalheim" begins.

Commented bassist/vocalist Johnny Hedlund: "The artwork is made by Sebastian Ramstedt, just like our previous three albums. It shows the new world 'Odalheim' at the break of dawn at Birka shores, and just before the attack of White Christ. The concept of the album is taken from the book by the same name."