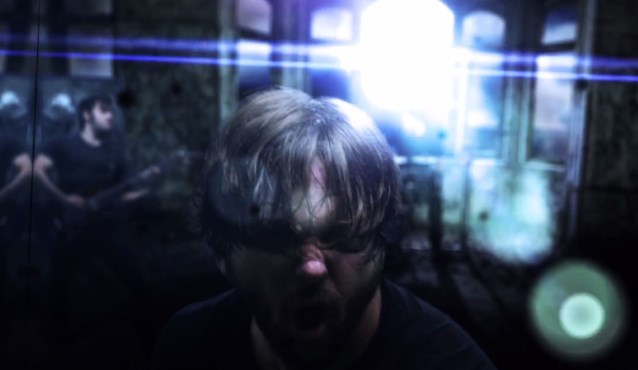 "The Swarm", the new video from Massachusetts metallers UNEARTH, can be seen below. The clip was directed by Dale "Rage" Resteghini and Tim Foster. The song is taken from UNEARTH's sixth album, "Watchers Of Rule", which was released on October 28, 2014 via eOne Music in North America and Century Media in Europe. The CD was mixed by Mark Lewis, who has previously worked with CANNIBAL CORPSE, WHITECHAPEL and DEVILDRIVER, among others.

After an awe-inspiring 15 years of blazing trails and dominating stages, UNEARTH is now institutionalized as a relentless force in heavy metal, standing the test of time with consistently triumphant creative output, tireless road warrior resilience, blue-collar-style workmanship and a resolute determination to deliver the goods.

Like SLAYER, CANNIBAL CORPSE, TESTAMENT and ANTHRAX before them, UNEARTH emerged as part of a burgeoning revolution in heavy music but continued to maintain their relevance and mastery of their craft. They've resisted and prevailed against changing trends, subcultural fashions and the way music is obtained and distributed with their credibility, integrity and unique persona intact.

The men of UNEARTH — longtime members Trevor Phipps (vocals), Buz McGrath and Ken Susi (guitars), John "Slo" Maggard (bass) — are proven "lifers." In just a couple of short years, drummer Nick Pierce has proven his commitment as well. They have put the furtherance of uncompromising heavy music at the forefront of their career goals.

UNEARTH's previous CD, "Darkness In The Light", sold 6,400 copies in the United States in its first week of release to debut at position No. 72 on The Billboard 200 chart.