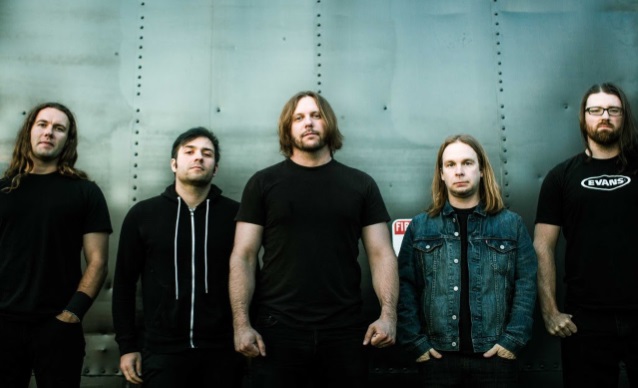 Massachusetts metallers UNEARTH have inked a worldwide deal with Century Media Records. The band will soon enter Graphic Nature Studios with producer Will Putney (EVERY TIME I DIE, BODY COUNT, GOJIRA, THY ART IS MURDER, SILENT PLANET) to begin recording the follow-up to 2014's "Watchers Of Rule" album. KILLSWITCH ENGAGE's Adam Dutkiewicz will record drums for the effort. A late summer/early fall release is expected.

The band commented: "For three decades, Century Media have been a highly trusted and leading force in heavy music and we are proud to further our partnership with them to a worldwide level. We saw their passion for music, dedication to promotion, ability to help secure touring/festival opportunities and the face to face personal relationships bands desire from labels from the European team during their release of our last album, 'Watchers Of Rule', so we know CM is the right worldwide home for us to bring everyone what's next in all things UNEARTH.

"We want to thank everyone at Century Media for bringing us into the fold to partner with a label that has such a rich history in heavy metal and hardcore while also continuing to be at the top of the label game. We'll see you all this summer starting on Warped Tour and continuing far beyond with worldwide touring on our new album."

Added Century Media Europe's head of A&R Jens Prüter: "It was 15 years ago when I first saw UNEARTH in 2003 at the local Pressure Festival in Essen, Germany with DARK TRANQUILLITY, HEAVEN SHALL BURN, CALIBAN, NAGLFAR, STAMPIN' GROUND, MAROON, ABORTED and CARNAL FORGE. HATEBREED, AMON AMARTH and YOUTH OF TODAY played as well but it was almost a Century Media festival — and actually a perfect example how close metal and hardcore could get.

"I was a huge fan of UNEARTH's 'Endless' EP (2002) and their performance was sheer energy — and it still is! It was great to follow their evolution starting from the early metalcore scene to the main stages of major festivals like Wacken, Hellfest and also this year's Warped Tour.

"We already released their last album, 'Watchers Of Rule', on Century Media Europe and are very proud about a new worldwide partnership.

"Thanks, UNEARTH! Looking forward to the next chapter!"

Mike Gitter, vice president of A&R for Century Media USA, commented: "UNEARTH have an unshakable foundation that they build on record to record. They've become a key player in today's metal landscape and will remain that for many records to come. Will Putney has become one of metal's true 'go-to' guys and a production force in his own right. Having Adam D. involved is a creative stamp that has been part of UNEARTH's best work to date. Having them both involved should be absolutely crushing."