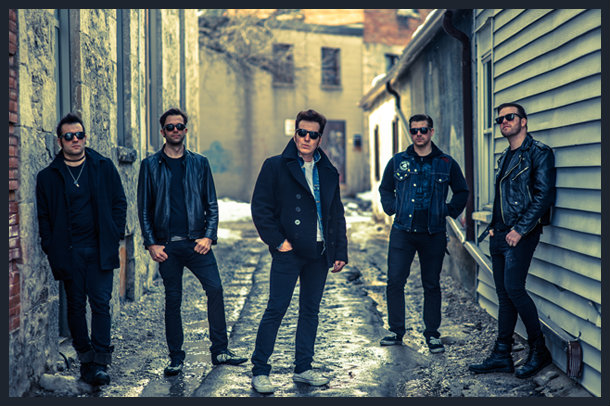 "Marissa", the new video from USA! USA! USA!, the band featuring guitarist Ken Susi of the Boston metallers UNEARTH, can be seen below.

USA! USA! USA! started when Susi started thinking about what got him into music in the first place, and it all came back to him in a rush of memories: girls.

Ken wrote his first song at 12 for a girl in his class. He recalled her happiness at hearing a simple song written specifically for her, and after years of writing and playing intense metal, Ken wanted to get that feeling back. He had a vision of the perfect American rock band: clean vocals, catchy hooks and riffs, big guitars. And all the songs would be for and about girls the band knew.

Ken reached out to the best players he'd met on the road, recruiting bassist Ben Alexis of Canada metal act ARISE AND RUIN and second guitarist Dave Stauble of New Hampshire hardcore heroes SINCE THE FLOOD. Rumor has it he found Pat doing session work.

They all fit the bill in terms of style and sound, but the frontman had to be the quintessential rock and roll crooner, a '68 Elvis for a new generation — with style and flash that would make the boys want to be him and the girls fall in love with him.

Ken found the answer to his prayers in Frank Pino, best known as the frontman of WALTHAM, Boston favorites who swept many a Boston Music Awards show, released three albums, toured Europe and was featured in a Disney documentary. Frank's classic rock n roll look, stage presence, and work ethic made him a perfect foil to Ken, and when they sang together their clear vocal styles meshed perfectly.

USA! USA! USA! boiled rock n roll down to its classic, primal THE BEATLES, Elvis and Ritchie Valens DNA — guitars, bass, drums, songs about girls — written with the same feeling as notes slipped into lockers, left on windshields outside the fast food joint where she work or a serenade outside her window.

With the chemistry firing on all cylinders, the band rushed into the studio and knocked out five songs — all titled with girl's names — and a supercharged cover of "Girls Just Wanna Have Fun" that has become their anthem. The result is the purest American Art Form: hook heavy, harmony-laden, driving guitar rock propelled by rocket fuel energy from five guys who love and respect girls (including their moms).

USA! USA! USA! titled the EP "What's Your Name" and, in an unusual move, released it online at Bandcamp on a "pay-what-you-please" basis. With no promotion or publicity it instantly became Bandcamp's number one download.

USA! USA! USA! is currently working on songs for a new, full-length album. They have played up and down the East Coast and across Canada to ever-growing crowds. They'll be hitting the road again when the new record is completed.