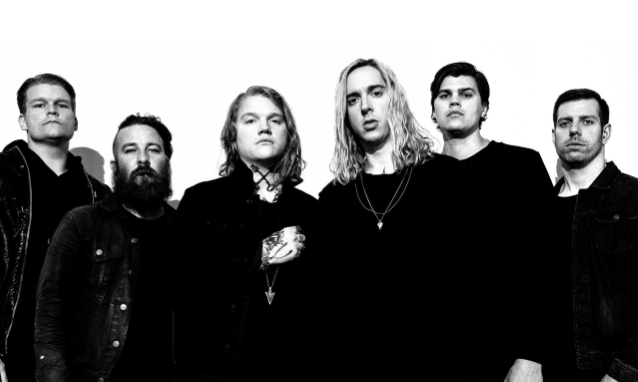 Fresh off an electrifying performance at the Aftershock festival over the weekend, where singer Spencer Chamberlain performed while still nursing a still-healing broken foot that he sustained during the band's appearance at Riot Fest, UNDERØATH has released the cinematic and thematically arresting video for "ihateit".

"The 'ihateit' video is a glimpse into what it's like to feel alienated, to need something you shouldn't need, to feel trapped and isolated and to feel like you have to keep returning to that place to find solace — it's a vicious cycle," said UNDERØATH's Aaron Gillespie.

The band is gearing up to hit the road on its "Erase Me" tour with DANCE GAVIN DANCE, CROWN THE EMPIRE and THE PLOT IN YOU in tow. The trek marks UNDERØATH's first major market headline tour in support of their new album, "Erase Me" (Fearless Records), which recently debuted at No. 4 on the Billboard Top Album Sales chart. The tour finds UNDERØATH returning to many markets they previously sold out on their incredibly successful "Rebirth" tour.