"Underground Never Dies!", published by Doomentia Press, is a photo retrospective of the extreme metal underground through fanzines and the statements of those who were involved back in the 1980s and 1990s.

"Underground Never Dies!" chronicles the underground metal explosion of the mid-1980s through early 1990s when a decentralized volunteer force created a parallel music industry for music that had no commercial appeal, but a fervent sense of truth and opposition to some aspects of post-modern civilization.

With over 500 pages of interviews, photos, excerpts from period fanzines and artwork, "Underground Never Dies!" addresses the complex interweaving of bands, fans, zines, promoters, artists and labels that fostered the underground metal movement and allowed it to expand with maximum flexibility.

Written by Grinder magazine editor Andrés Padilla, the book includes fanzines from around the world as well as an extensive selection of underground flyers, so it will be not only a narrative of the history of underground metal, but also a massive and interesting menu of diverse viewpoints for devotees of underground metal genres such as death metal, black metal, grindcore and doom metal.

Doomentia Press will publish and distribute "Underground Never Dies!" , which will include a compilation 12-inch LP featuring historically important bands exhumed from the '80s, such as SLAUGHTER LORD (Australia), MUTILATED (France), INCUBUS (Florida, USA), POISON (Germany), EXMORTIS (USA), FATAL (USA), ARMOROS (Canada), MENTAL DECAY (Denmark), FUNERAL NATION (USA) and INSANITY (USA). Presented in gatefold format, and limited to the first 500 copies of the book, the LP will be followed by CD and tape versions of the same material with added bonus tracks.

Cover art by Mark Riddick accompanies introductions by Ian Christe (Bazillion Points), Chris Reifert (AUTOPSY), Erik Danielsson (WATAIN) and Alan Moses (Glorious Times). This celebration of the underground will attempt to make sense of the fertile but chaotic years of its origins.

"The purpose of this book is to make sense of the origins of underground metal," Padilla said. "We know it happened; now we need to find out why. And revel in what it might be telling us, not only about our society, but ourselves and our needs as human beings." 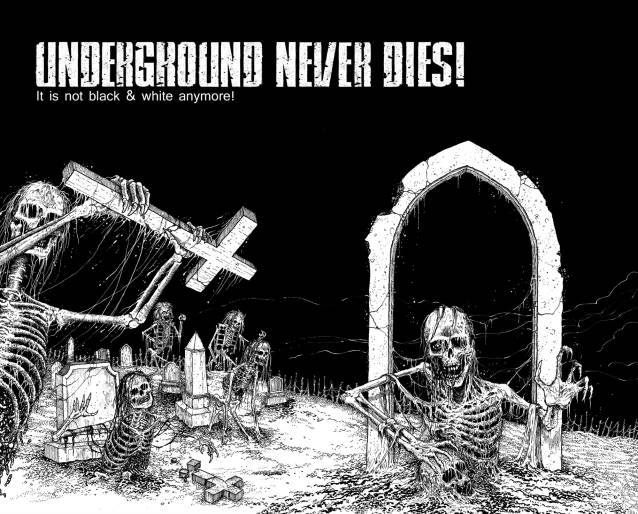 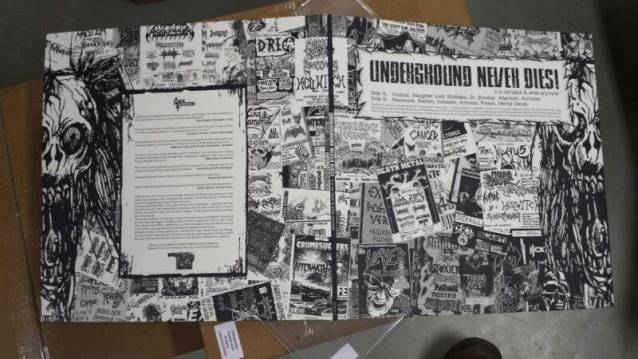