UNCLE ACID AND THE DEADBEATS and GRAVEYARD are teaming up next March for the "Peace Across The Wasteland" co-headlining North American tour. The trek kicks off March 6 in Philadelphia, Pennsylvania and runs through March 30 in Toronto, Ontario, Canada. TWIN TEMPLE will provide support through the March 16 date in San Francisco, California. On March 18, DEMOB HAPPY will join the tour for the rest of the run. A complete list of dates can be found below.

A special BLABBERMOUTH.NET presale for all shows will begin on Wednesday, October 24 at 10:00 a.m. ET and end on Thursday, October 25 at 10:00 p.m. local time. When prompted, type in the presale code "GYUABBM" to access tickets before the general public.

Tickets go on sale to the general public on Friday, October 26.

Revered Swedish heavy rock band GRAVEYARD is touring in support of their critically heralded fifth album, "Peace", which is available now from Nuclear Blast. The band's latest chapter in a celebrated catalog guides the listener through an ever-changing musical landscape filled with their trademark take on classic rock. From the opening track's blistering declaration that "It Ain't Over Yet" to the final note of heart beating bass on the epic and moody rocker "Low (I Wouldn't Mind)", the band manages to squeeze out every last creative drop of what there is to know, hear and love about the band.

Says GRAVEYARD: "It's time to let 'Peace' roll out across the 'Wasteland'. GRAVEYARD and UNCLE ACID AND THE DEADBEATS will co-headline a tour of North America in march 2019. This will be the first time the bands tour together and were both bringing tons of new music. This one is going to leave no mind unblown."

The brainchild of singer and guitarist Kevin Starrs, UNCLE ACID ANDTHE DEADBEATS have been making extraordinary music since 2009. After the succesful reissue of "Vol 1" in 2017, they have now returned in support of their widely acclaimed fifth album, "Wasteland". The record is 47 minutes of vital, audacious and frequently bewildering heavy psychedelia, and is instantly recognizable as Starrs's most immersive and evocative body of work yet.

Says Starrs: "We're looking forward to travelling across the wasteland and destroying minds with GRAVEYARD in 2019. This will be our first North American tour in three years so it feels long overdue. See you down the front!" 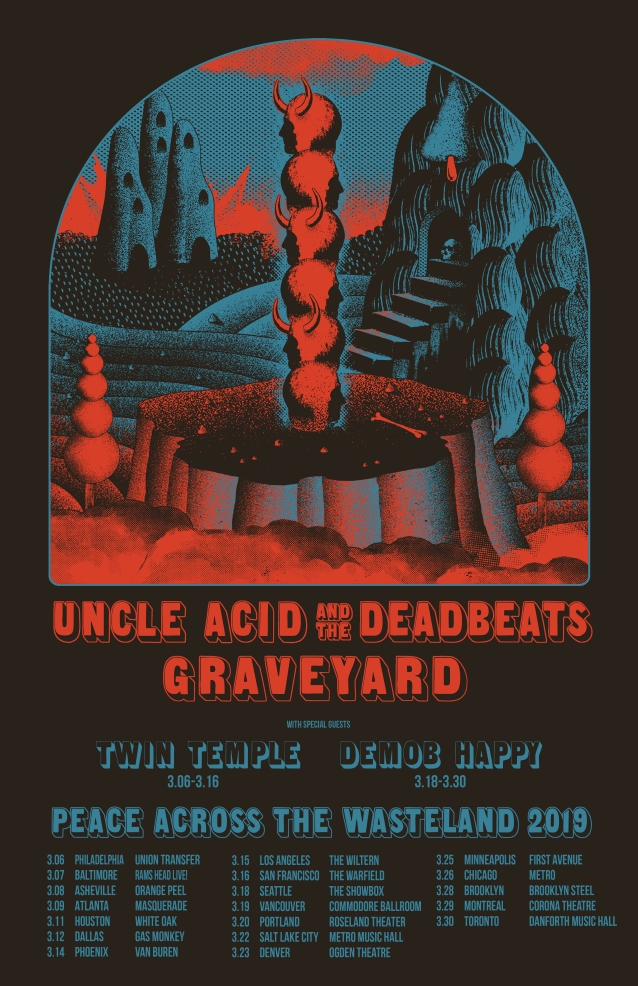