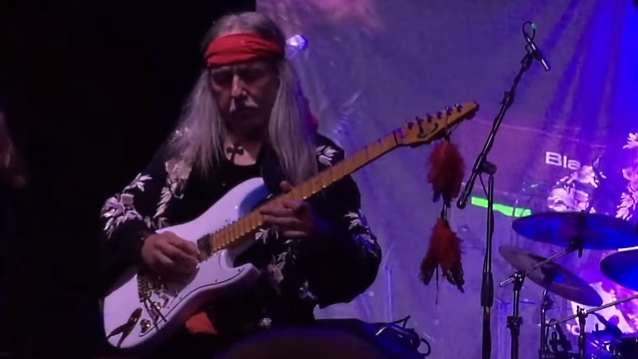 Legendary German guitarist Uli Jon Roth was asked in a recent interview with Rock 100.5 WNNX-FM for his opinion on the state of guitar playing today. He responded (hear audio below): "The general technical standard has definitely gone up. You can now hear a guitar player playing fast arpeggio runs in every bar up and down the country. That didn't use to be the case.

"It's kind of rare that something really touches me, because I'm not so interested in the technical aspects of it," he continued. "I need something to move me on a musical level, and usually that's rather thin on the ground nowadays, because the music that's being played nowadays is not really very guitar based and it doesn't really allow for much scope in most cases. So the guitar seems to be sidelined by the mainstream, and that's just a fact."

According to Roth, guitar players today don't have the range of creativity their older counterparts used to have. "Whenever I hear something, it tends to be most of the time just more of the same, unfortunately," he said. "So it's rare that I hear something that really astonishes me… I think it's just a sign of our times. We live in weird times. Everything is so fast-paced and social media-dominated. People find it difficult to do anything that has depth, because it's not really much asked for. People want instant gratification and a quick fix for just about anything — from hamburgers to what's on their iPhone and Androids. And that's fine, but that's not really good breeding ground for coming up with anything that has a deeper artistic meaning or any vision.

"I think we live in very, very superficial times, and the music that's around tends to reflect that," Uli added. "So that's what I get when I'm forced to listen to the radio or whatever is being played. Most of it is just pretty blatantly uninspired to my ears."

Roth was in the SCORPIONS for five years before leaving the group in 1978, following the release of the live double album "Tokyo Tapes".

In recent years, Roth has revisited the early music of his period with the SCORPIONS, which resulted in the "Scorpions Revisited" double CD and "Tokyo Tapes Revisited" DVD/Blu-ray releases.

The North American leg of Uli's 50th-anniversary tour kicked off on March 20 at Whisky A Go Go in Los Angeles and will run through May.