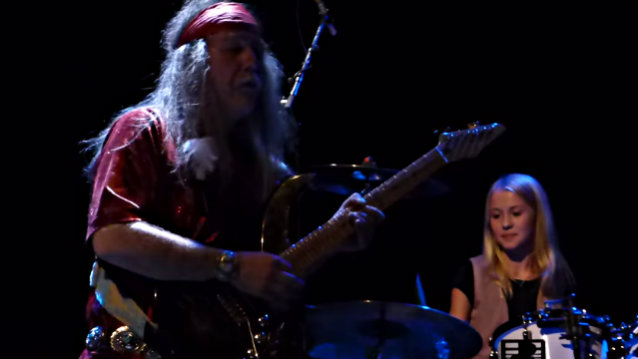 "I think it's very important to really do something for young talent, because when we started, I was that age," Uli said while introducing Nea to the crowd. "And we were fortunate, because we had a lot of gigs to play, and we had opportunities. Nowadays it's really difficult for the kids. All they can do is sit at home. They don't have the gigs anymore that we had. And it's just really difficult to get good, because that really helps [when you perform] on stage."

Nea started playing drums in early 2008 after seeing a drummer on TV. She got her first drum kit Roland TD-3 at age 5 and began playing/rehearsing every day to CDs/acoustic guitar, mostly Elton John's early rock songs and material from THE WINGS' "Band On The Run" album. At the age of 6, she began rehearsing songs from VAN HALEN's first album, Frank Marino and from Uli Jon Roth's "Electric Sun".

She is inspired by the drummers Morgan Ågren, Jeff Porcaro, Simon Phillips and Stewart Copeland.