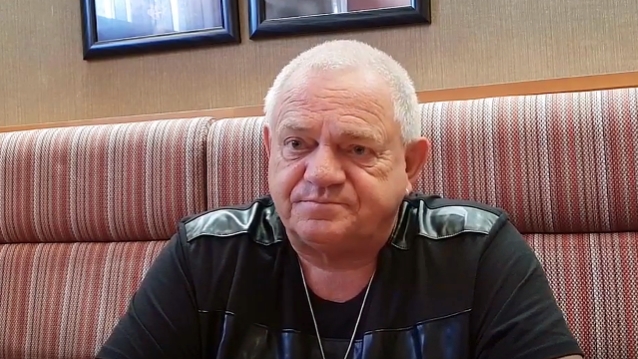 Former ACCEPT frontman Udo Dirkschneider told Russia's Mediator that he was "lucky" to find U.D.O.'s new guitarist, Dee Dammers. Dee replaced American musician Bill Hudson, who exited U.D.O. in April after touring with the band for only a year.

"This time, I took more time to find the second guitar player for U.D.O.," Dirkschneider explained (see video below). "With the last two, I was not really lucky; they were not really team players. The last one I had from America… he did some strange things. He came up to me one night in America and said, 'Why Andrey [Smirnov, U.D.O.'s other guitarist] is playing all the solos? I can do them better.' That was already for me, like [clears throat]. So, this time, after the American tour, I said, 'Okay, guy, sorry, but that doesn't work with us.' And then I was asking Stefan Kaufmann [former ACCEPT drummer and U.D.O. guitarist] to help us out for the festivals over the summer. And that, for me, was the point to have time enough to find the right one. So this guy is 26 years old — young — [and] let's say unknown, definitely. Maybe in the area where he is living he is quite known as a guitar player, but not in general internationally. He's really, like… He's burning inside — he really wants to do this."

This past August, Hudson, who has previously played with TRANS-SIBERIAN ORCHESTRA, CIRCLE II CIRCLE and JON OLIVA'S PAIN, issued a statement saying that he left Udo Dirkschneider's DIRKSCHNEIDER of his own accord and wasn't pushed out of the band, despite the singer's suggestion to the contrary. "I resigned from DIRKSCHNEIDER prior to the start of their American tour," he explained. "I did, though, remain with the band for that tour as a favor to the band's manager, who asked me to stay on for the tour. Furthermore, upon the completion of their American tour, I was asked to perform with the band in Europe a month after the American tour was completed on the 'Full Metal Cruise'… No one at any time, including Udo Dirkschneider, ever said to me, 'Sorry, guy, but this doesn't work with us.' I resigned from the project/band, stayed on for the American tour and the cruise as requested by management, and then fully departed."

A month later, former U.D.O. guitarist Kasperi Heikkinen, who preceded Hudson, also fired back at Udo, saying that the singer's claim that Kasperi was "not a team player" was "really sad, unnecessary and unprofessional." "Even these Udo's bitter comments can't spoil the countless great memories from those times," Kasperi said.

Bassist Fitty Wienhold, who joined U.D.O. in 1996, announced his departure from the band in September, saying in a statement that he "decided to take a new way" in his life.

U.D.O.'s latest album, "Steelfactory", was released on August 31 via AFM.