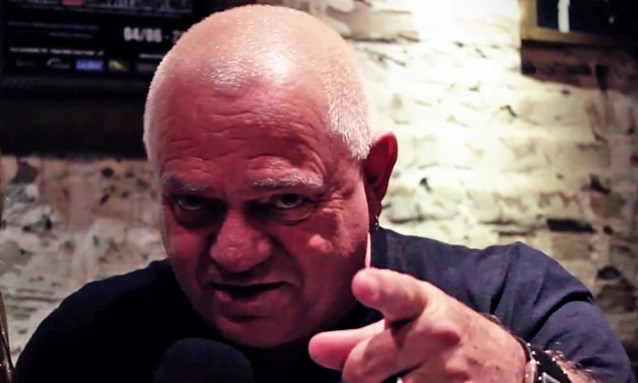 Dani Buarque of the "Lokaos Rock Show" recently conducted an interview with former ACCEPT and current U.D.O. frontman Udo Dirkschneider. You can now watch the chat below.

Asked how it feels for him to see ACCEPT continue with a new singer (ex-TT QUICK frontman Mark Tornillo) as his replacement, Udo responded: "What can I say? I mean, I was watching a show of ACCEPT in Hamburg, and I was a little bit disappointed. It was without any emotion. For me, there was no band on stage. Playing-wise, it was okay, but it was without any emotion. It was automatic — like, do it and then go."

Regarding whether he woud ever consider reuniting with his former ACCEPT bandmates in the future, Udo said simply, "No."

Dirkschneider also spoke about what he is able to do musically with U.D.O. that he couldn't do while he was a member of ACCEPT.

In a September 2014 interview with Music Enthusiast Magazine, ACCEPT guitarist Wolf Hoffmann was asked if Udo Dirkschneider has tried to reach back out or re-establish communication with his ex bandmates in recent years. "I haven't heard from him in forever other than indirectly in the press, and honestly none of us are even thinking about him," Wolf replied. "It's really not been an issue at all, I mean, we surely put it to rest with this album [the recently released 'Blind Rage']. Clearly it was a big deal the first time around for [2010's] 'Blood Of The Nations'; a lot of people were asking, 'Why?' and 'What?' and 'How come?' But the story has been told so many times now that it's clear that we've started a new life and Udo didn't want to be part of it. He made his choice, we're moving on, and that's that."

In a September 2013 interview with BigMusicGeek.com, Udo stated about the possibility of another full-scale reunion between him and ACCEPT: "We did a reunion in '92 and did three albums together ['Objection Overruled', 'Death Row', 'Predator']. For me, the first one was a real ACCEPT album. We did the next one with only with one guitarist and for me, the sound with ACCEPT was always with two guitarists, so there was already some problems coming up. The whole atmosphere was completely gone. We did a tour and then we said, 'Okay, before we destroy the name ACCEPT, let's split up again.' Then they asked me twice after fifteen years to do another reunion and I said, 'Guys, I'm quite successful with U.D.O., and if I shut down U.D.O. again and join ACCEPT, we have to talk about a lot of things.' In the end, I said, 'Okay, if I do this and we split up again, I cannot come up for a third time with U.D.O. I have to continue under the name ACCEPT.' And I said to Wolf, 'You were stealing the name in the '80s. You get the rights on it without asking somebody, especially me.' And he said, 'No, I cannot do this.' and I said, 'Okay.' There was a lot of other points and then I said, 'Okay, guys. Sorry, but I don't want to do this. I will continue with U.D.O. I wish you all the best.' That was the whole thing with the reunion."

He added: "The new singer is a really good singer, but I think he has problems when he sings all the old ACCEPT songs."

Asked if he is still on "speaking terms" with Wolf, Udo replied: "No. There is not talk anymore. I don't want to start a war, but Wolf was saying a lot of bad things about me and I don't understand why he did that. Then, later on, when they would come up to people who didn't know what they had said before, they changed completely. They'd say, '[Udo's current band] U.D.O. is great. Udo is such a nice guy.' So I said, 'Never ever talk to me again.' I don't care. I am happy and they seem to be happy, so what can I say?"