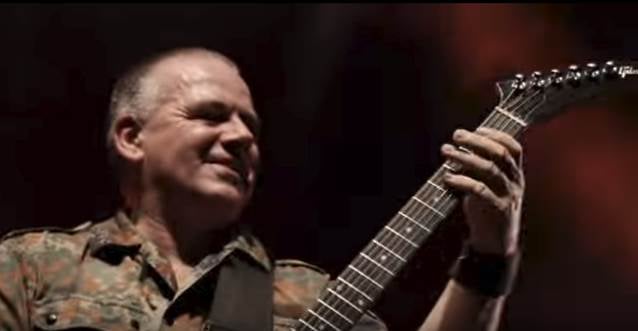 Says U.D.O. in a statement: "We are very proud and happy that Stefan is going to be with us during the festival period 2018. But again, Stefan's (re)appearance with the band is only temporary. The name of the new permanent guitarist who will join us after the summer will be announced soon."

Dirkschneider told Powerline in a 2013 interview that Kaufmann "had problems with his back" toward the end of his run with U.D.O. "When we did the 'Rev-Raptor' album, we had to stop for three months," he said. "He couldn't move. And that was a really bad thing. We were already thinking at this time maybe it's better to stop being on tour with us. He said no and then he was fine after awhile but then the real problem came up on tour. He had to take really heavy pills. You could kill an elephant with those, you know, and he could not really move on stage. Always, you know, he had so much pain, I know it. He was really never showing this but if you're so long together with somebody, you know what's going on. If you have always pain, then you're not always in a good mood, you know. He started shouting, he was always in a bad mood and the whole atmosphere was going down in the band, and that was also another thing. Then I said, 'After the 'Rev-Raptor' tour, Stefan, I think we better stop.' And then he said in the end to me, 'You are right.'"

Guitarist Bill Hudson exited U.D.O. and DIRKSCHNEIDER in April "due to a difference in their individual visions for the future," according to a statement released by Udo. The statement added that there was no "negative feelings on either side."