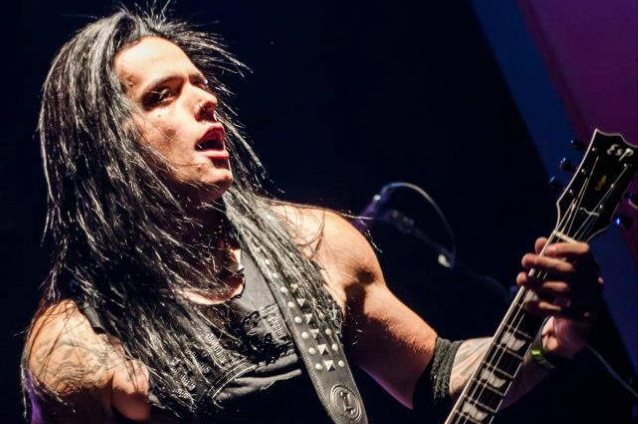 U.D.O. and DIRKSCHNEIDER said in a statement: "We are very proud to announce that Mr. Bill Hudson from Brazil is the new guitarist of DIRKSCHNEIDER/U.D.O.!

"Bill is based in the United States, but has already been in Pulheim [Germany] a few weeks ago to join the songwriting session for our next album, which we will start recording soon.

"Bill fits in, in every way, perfectly with us and builds a fantastic guitar team together with Andrey Smirnov. He is very experienced and has shared the stage with several known bands, most notably CIRCLE II CIRCLE, JON OLIVA'S PAIN and TRANS-SIBERIAN ORCHESTRA for the last few years. It's not really necessary to talk about his skills; simply check it out on our next tour and you will see what we're talking about!

"After Kasperi left the band, we have received many suggestions and applications from great guitar players from all over the planet. At the same time, we started getting hints from different and unrelated people in the business pointing straight into the same direction, telling us to check out this Brazilian/American guy. Once in Germany, he convinced everybody from the get-go and it was very clear that this guy had all the requirements to become the new band member.

"We are REALLY looking forward to kick ass even more so than ever before!"

Heikkinen left U.D.O. and DIRKSCHNEIDER in February for personal reasons.

"Decadent" was released in Europe in January 2015 via AFM. The disc was recorded in Udo's current home, Spanish island Ibiza, and also at Redhead Audio Productions in Wilhelmshaven.

DIRKSCHNEIDER released a live album called "Live - Back To The Roots" in October via AFM Records. The effort, which was recorded on April 2, 2016 at Kaminwerk in Memmingen, Germany, was made available as two-CD digipak and gatefold three-vinyl in four different colors (black, gold, silver and clear).