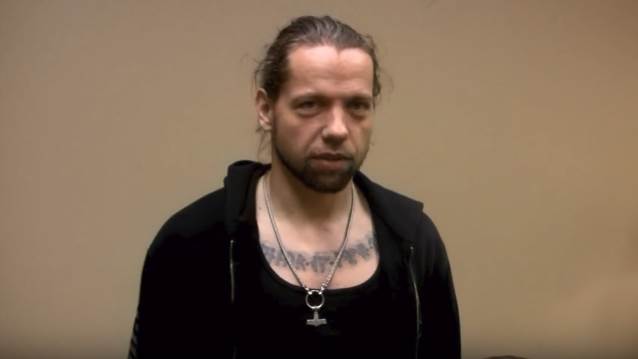 Alexiel Divine of The Offering Webzine conducted an interview with frontman Heri Joensen of Faroese folk metal band TÝR during a recent stop on their North American tour with ORPHANED LAND, GHOST SHIP OCTAVIUS and AETERNAM in support. You can watch the entire chat below. A few excerpts follow (transcribed by BLABBERMOUTH.NET).

On their current North American trek:

Heri: "It's been wonderful so far. This is our first U.S. headlining tour in oh, a long time, eight to nine years. It's been great, far over our expectations. It's been slow lately because we've been in the studio, our home studio, which is taking a long time, but this album is about ready for release and we're going to do some more touring after that."

On the status of the follow-up to the band's most recent studio album, 2013's "Valkyrja":

Heri: "It could be a little bit different than the previous albums because Terji [Skibenæs, guitar] and Gunnar [Thomsen, bass] have been more involved in the songwriting process and they don't write music the way that I do. So the styles are diverging a little bit. There's more influences, but I still arrange the choirs and vocal melodies, mostly. It still sounds like TÝR, but with slightly different styles in some places. The songs that I wrote are like the same old, same old, so, there's something for those who like the standard TÝR style and something for people who might like something that sounds a little bit different."

On how he feels about "Valkyrja" five years after its release:

Heri: "It was a good album. There's always some details on it that I wish I had seen and changed before we released it, but it's like that with every album, except 'Ragnarok', maybe. I'm hoping with this album we'll have worked through it properly because we had a lot of time for it. But, yeah, actually that was our best album so far, numbers-wise. It sold more than the other albums. People still buy it and all in all, I'm very satisfied with it. It's probably the closest album to us. You change opinions slowly over time and something I wrote maybe ten years ago, I don't stand by anymore, but that does not go for 'Valkyrja', it represents my opinions at the moment."

On whether if there are any singers he hopes to collaborate on a future TÝR release:

Heri: "Yes, I would, but it's difficult to get the ones we want, very difficult. You sort of have to know people personally. I would do the same. I wouldn't work with anyone I don't know personally. It's just a thing that people do in the business. For this album, we don't have anybody. There are some people we'd like to get, but we don't know them. [Laughs]"

On what made him become a musician:

On his immediate goals for TÝR:

Heri: "Well, right now, I hope we are going to release this album and be successful with it like with the last album and do a lot more touring than we have done in the recent past. So, that's really what I look forward to — this new album and getting back to playing festivals, shows and tours."

"Valkyrja" was released in 2013 by Metal Blade and features covers of IRON MAIDEN's "Where Eagles Dare" and PANTERA's "Cemetery Gates".