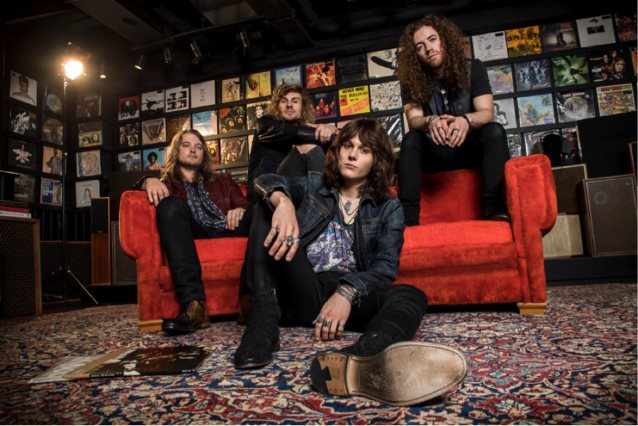 Snakefarm Records has announced the signing of TYLER BRYANT & THE SHAKEDOWN to a worldwide deal.

Housed within the global infrastructure of Spinefarm Records (a UMG label), the Snakefarm brand will provide a supportive home for international artists, both established and new, from the increasingly buoyant roots rock world — music based on authenticity and emotion, under-pinned by a core set of values and beliefs.

In this respect, Nashville-based TYLER BRYANT & THE SHAKEDOWN — fresh from guesting with GUNS N' ROSES — stand as a flagship representation, ticking all of the available boxes.

Comprised of Caleb Crosby on drums, Graham Whitford (son of AEROSMITH guitarist Brad Whitford) on guitar, Noah Denney on bass and backing vocals, and Texas-born Tyler on guitar and vocals, the quartet released six-track EP "The Wayside" in 2015, produced by Grammy Award winner Vance Powell and released via Spinefarm in Europe. This six-track outing made it clear that here was a group with the skill and the knowledge to draw from the glories of the past while simultaneously keeping a clear eye on the future, mixing history with a youthful, energetic heartbeat.

Due to be released on November 3, the new self-titled TYLER BRYANT & THE SHAKEDOWN album (and debut Snakefarm release) was crafted in Nashville by the band and mixed by producer, engineer and multi-instrumentalist John Fields (SOUL ASYLUM, Paul Westerberg), featuring a brand new set of infectious and varied songs, some of which — including epic rocker "Aftershock" — have become staples of the live set.

In 2016, TYLER BRYANT & THE SHAKEDOWN joined friends and Nashville neighbors THE CADILLAC THREE for a tour of the UK, sharing the stage with the headliners on a nightly basis — the start of an on-the-road, 'round-the-world adventure that has seen them guesting with some of rock's foremost legends (AC/DC, AEROSMITH, DEEP PURPLE, GUNS N' ROSES), appearing at the Download and Ramblin' Man festivals in the U.K., and generally becoming as comfortable projecting their passion into stadiums as rockin' out in theaters and clubs…

Says TYLER BRYANT & THE SHAKEDOWN: "We're beyond excited to be teaming up with Snakefarm to release our new self-titled album. We've become close with their team, and have learned that their passion for real music is not rivalled by many. That's something we both share. Together we're gonna take our brand of rock 'n' roll to as many people as we possibly can."

Adds Snakefarm/Spinefarm U.K. head of A&R Dante Bonutto: "There's so much great activity in rootsy guitar music right now, and TYLER BRYANT & THE SHAKEDOWN are the perfect group to both showcase and celebrate everything that's going on. They're young, they’re dedicated to their craft, they've got barrel-loads of attitude, and they rock hard… and when they get onto a stage, and they've already occupied some of the biggest stages there is, they know how to entertain. Snakefarm and THE SHAKEDOWN, The Snake and The Shake, it feels completely right…"