Three people were killed and at least seven injured Thursday night (April 16) during a concert by the British crust punk band DOOM in Santiago, Chile.

According to local media reports, the building where the concert was being held collapsed because the venue's capacity was exceeded by more than fifty people.

Seven people had life-threatening injuries and were taken to health centers for treatment.

"It is an authorized club," police chief Hugo Insulza told reporters, according to AFP.

"What happened was that more people were in the club than should have been present," causing part of the building structure to collapse.

"There was a crush of people," a spokesman for the national emergency office ONEMI said. "Even after the venue reached its full capacity, people kept pushing to get in. That led to the collapse of a containment fence that fell on people inside."

The club's administrator was taken into police custody pending an investigation.

According to Soychile.cl, the deceased individuals have been identified as Daniel Isaías Moraga, 24, Gastón Eduardo Angladetti, 25, and Fabián González, 22.

The members of DOOM said in a statement: "We are deeply distressed. This tragedy happened without our knowledge and was completely out of our control.

"The first we heard was when we were told to leave the stage after a few songs, and taken back to our hotel. Only then did we receive trickles of information about the severity of this tragedy.

"This was our first time in Chile and we were unaware that such a thing could happen with such a devastating outcome.

"We would like to pass on our deepest condolences to the families and friends of those who lost their lives or those who were seriously injured."

DOOM is an English crust punk band from Birmingham, England, whose first, influential lineup existed from 1987 to 1990. They recorded for Peaceville and are cited as an early precursor to the grindcore style of heavy metal music. 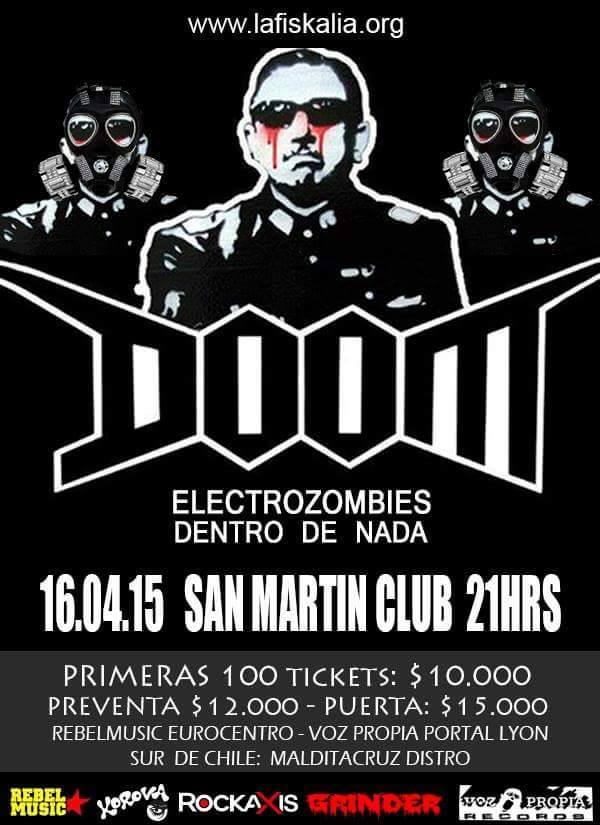