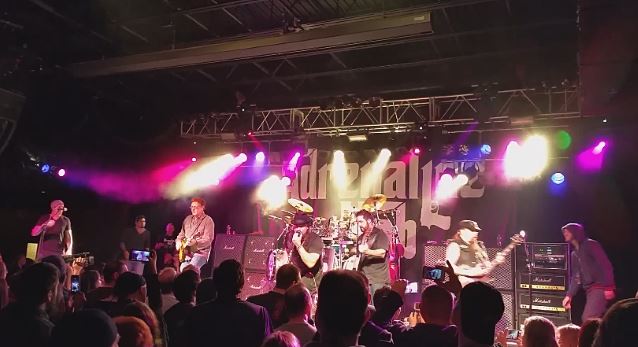 TWISTED SISTER guitarist Jay Jay French joined ADRENALINE MOB on stage last night (Saturday, March 21) at the Starland Ballroom in Sayreville, New Jersey to perform the TWISTED SISTER classic "You Can't Stop Rock 'N' Roll" as a tribute to the two bands' drummer, A.J. Pero, who died one day earlier of a suspected heart attack. Fan-filmed video footage of his appearance can be seen below.

"He had been complaining of a sore arm all week and took a few days off from his tour with the band ADRENALINE MOB," Stanton said.

The 55-year-old Pero was a member of TWISTED SISTER from 1982 to 1986, from 1997 to 1998, and again from 2003 until his death. Pero performed on ADRENALINE MOB's last two albums and recently joined FOUR BY FATE, also featuring former FREHLEY'S COMET members Tod Howarth and John Regan.

In a statement issued the day of Pero's death, Jay Jay French said: "A.J. Pero was a force, the likes of which I doubt I will ever have the chance to play in front of again. His drumming was legendary but his heart, as a human being, was even greater. This April 1st would have been his 32nd year as a member. In the TWISTED SISTER world, he was always affectionately known as 'the new guy.' That is how long and deep our history was/is. In our hearts, he will always be the engine that drove the train. I loved him and [on March 20] my heart [was] ripped out. RIP."