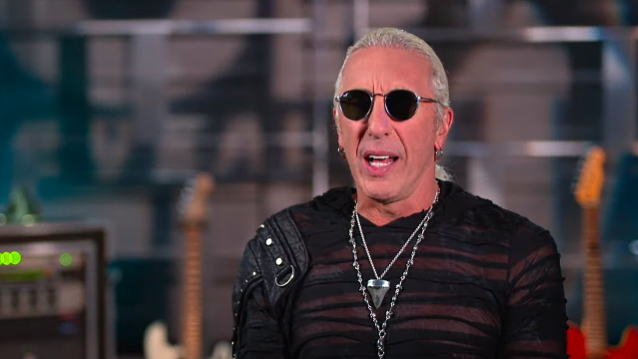 For the season three premiere of AXS TV's "The Top Ten Revealed", the show is counting down the top ten songs that have the word "rock" in the title. The list includes tracks from the biggest names in the genre such as QUEEN, AC/DC and Joan Jett.

In the preview clip below, TWISTED SISTER's Dee Snider talks about allowing the band's song "I Wanna Rock" to be re-recorded with different lyrics for a feature in "The SpongeBob Squarepants Movie", released in 2004.

He says: "'I Wanna Rock', directed by Marty Callner, who directed the first TWISTED video, 'We're Not Gonna Take It', was actually part two. It was, like, here's dad, the dick at home. What happens when he goes to work? Well, he's a nasty school teacher. Years later, I got a phone call [from] my manager that 'SpongeBob Squarepants' was interested in using 'I Wanna Rock' as the big finale in 'The SpongeBob Squarepants Movie'. I immediately lit up — licensing is fantastic; I have two kids in college. And he goes, 'There's one catch. They wanna change the words to 'Goofy Goober Rock'.' Well, I lose my mind. I'm, like, 'Are you kidding me? This is my music. This is my art. How much? Do they want me to sing it?' They paid me a lot of money. It's called 'Goofy Goober Rock'. God bless 'SpongeBob Squarepants'."

Season three of AXS TV's "The Top Ten Revealed" will premiere on April 19.

The original "I Wanna Rock" music video featured Mark Metcalf, who starred in the clip for "We're Not Gonna Take It", yelling at a kid in an extended scene before the song starts, with the kid responding "I wanna rock" to Metcalf's question, "What do you wanna do with your life?"

This past February, "I Wanna Rock" was featured in Facebook's Super Bowl ad. The ad, which promoted the Facebook Groups feature, also included appearances by Sylvester Stallone and Chris Rock.