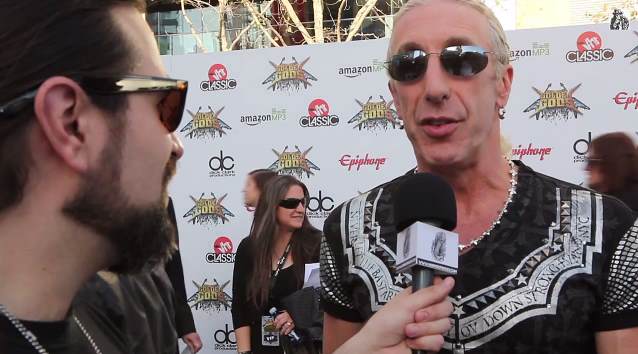 Jo Schüftan of Horns Up Rocks! conducted an interview with TWISTED SISTER singer Dee Snider on the "black carpet" of this year's Revolver Golden Gods awards on April 23 at Club Nokia in Los Angeles, California. You can now watch the chat below.

"Dee Snider's Rock & Roll Christmas Tale" tells the story of DÄISY CÜTTER, a heavy metal bar band looking to make it big even though the '80s are LONG over. This year, these four guys are ready to take the ultimate step and, in mythic rock tradition, sell their souls to the devil in exchange for success beyond their wildest metal dreams! But every time they try to seal the infernal pact, their headbanging anthems turn into warm-hearted carols. Soon these rockers are forced to realize their dreams of stardom are no match for the Christmas spirit.

In May 2012, Snider released both a memoir, "Shut Up And Give Me The Mic", and a showtunes album, "Dee Does Broadway".

Filled with entertaining anecdotes and candid confessions, "Shut Up And Give Me The Mic" takes you through the good times and bad with a heavy metal star who worked as hard as he played, and who did it all for his wife, four kids, and millions of fans. As lead singer and songwriter of TWISTED SISTER, Dee Snider became the poster boy for heavy metal, hair bands, and the wild side of rock. Now, in his twisted new memoir, he reveals the real stories behind the crazy makeup, the big hair, and badass hits like "We're Not Gonna Take It" and "I Wanna Rock". In his journey from every parent's worst teenage nightmare to Renaissance man, Dee avoided the usual pitfalls associated with rock stars. But that didn't stop Tipper Gore and the Parents Music Resource Center from targeting him — a fight that led him to testify before Congress with Frank Zappa. He may have been slapped with a Parental Advisory warning label, but, through it all, Snider stayed positive and focused on being the best he could be.

When asked by RockMusicStar what "his angle" was with the book, Snider replied, "First of all, I wrote every word myself. Simon & Schuster (the publisher) didn't want me to do that initially, because nobody does. And if you believe the heroin addicts actually took notes.... Really? They couldn't find their dick, let alone a pencil. I never did any drugs and I've never drank. So I'm really a clean and sober participant, and observer, of the 'decade of decadence.' The book for me, deals with my rise and fall. It starts with the day that I decided I wanted to be a rock star, and then ends with me at my lowest point in my life/career, post-TWISTED SISTER, when I lost everything (in the '90s). I was completely down and out. They made me put an epilogue on it, but I was like, 'Everyone knows that I'm doing well now.' But yeah, the ending is so depressing. The epilogue skips ahead 15 years, where I'm taking my final bow on Broadway, on opening night, reflecting on how far that I've come back in the past few years. The book is really the story of my struggle, my perseverance, and it sort of examines how things happened, for better or for worse."