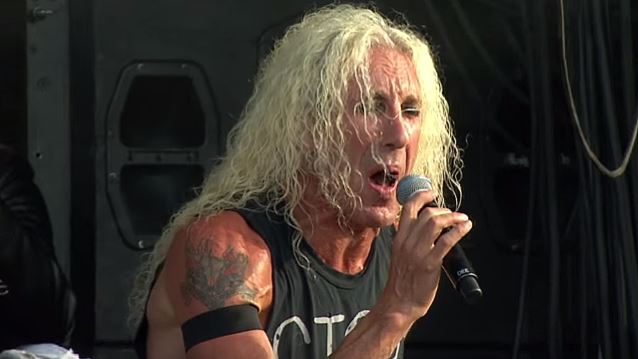 TWISTED SISTER frontman Dee Snider has signed a record deal to release a new solo album titled "Now". Most, if not all, of the material on the disc will be a collaboration with Damon Ranger, a Grammy and Emmy Award winner whose credits include Katy Perry's "Roar", working with Kanye West, and the score for "Life Of Pi". Snider has already recorded five songs with Ranger and his team, including members of pop singer Pink's band, in Chicago, and is preparing to return to the studio at the end of February to complete the effort.

During an appearance on a recent edition of the "One On One With Mitch Lafon" podcast (Facebook page), Snider stated about his new musical path (hear audio below): "I've been approached by some top songwriters who said, 'Dee, you're iconic, and we think we can bring you to the masses with contemporary rock music.' And I was, like, 'Let's do it.' They came to me. These are people who write for Kanye, they write for Katy Perry, they write for Pink, they write for Taylor Swift… They're top pop songwriters. And they said, 'Listen…' This guy's name is Damon Ranger. And he says, 'You're iconic. You're the voice of rebellion. And I think with the right songs, you could reach a whole new audience — a mainstream rock audience.' And I said, 'You've got songs?' He goes, 'Yeah.' I said, 'Let's give it a try.' So we demoed one song, called 'We Are The Ones', which is a real Active Rock… it's hard, but it's not metal. And it came out great. So we went into the studio and recorded four more songs. And I just signed two [record] deals, and we're going back into the studio to finish the album at the end of February. And I'm not sure when we're gonna release it."

Describing the sound of "Now", Snider said: "To me, I like the word 'new.' I like something contemporary. And that argues with the point… Someone is screaming at their iPhone [right now while listening to this interview and going], 'You said [you wouldn't make any] new music.' Yeah, [no new music] from me. Actually, Damon said, 'So do you wanna write with me on this?' I said, 'Oh, no!' I said, 'I don't know what's new.' I said, 'I know how to write old.' I said, 'I don't know how to write new music.' So I said, 'I don't want anything to do with the writing process. Create some songs, and if I could feel inspired by them, I will sing them.' And the stuff is really great. It's not thrashy; it's not metal. But it's got attitude; it's got my attitude. It's anthemic."

He continued: "I've been challenged to transform myself at the ripe old age of 61, and I like being challenged. It was almost a dare. I don't wanna say it's out of my wheelhouse, 'cause it's my voice. But this stuff is very different. It's edgy. Think FOO FIGHTERS, think QUEEN stadium anthem [type of sound], think that kind of mainstream rock. So it's still crunchy, and it's still got attitude, but it's not '80s rock. It's contemporary-sounding stuff."

Dee added that he is open to the idea of playing shows in support of "Now", but cautioned that "if I play out, [the setlist is] gonna [consist of] just new music. And yeah, I'll probably do [classic TWISTED SISTER songs] 'We're Not Gonna Take It' and 'I Wanna Rock' as an encore. But it's just gonna be the new sound. No more headbanging [laughs], no more throwing my body on the ground. It'll still be an intense, rocking performance, but it's gonna be more mainstream."

Snider admitted that it will be a tall order convincing rock music fans to embrace his new sound. "Will they be able to say, 'Oh, Dee Snider — new contemporary rock music. Can we accept Dee Snider?'" he said. "So far… Like I said, we demoed [several songs] and we got record deals, so we've got people who see it and hear it and believe it. So we'll continue down this path and we will see."

A new Dee Snider rock song called "To Hell And Back", which the singer recorded with his solo band, including former SILVERTIDE guitarist Nick Perri, made its online debut last July. It was announced at the time that the track would be included on a new album that Dee was working on that was also supposed to feature material from Snider's past, including his worldwide hits with TWISTED SISTER.