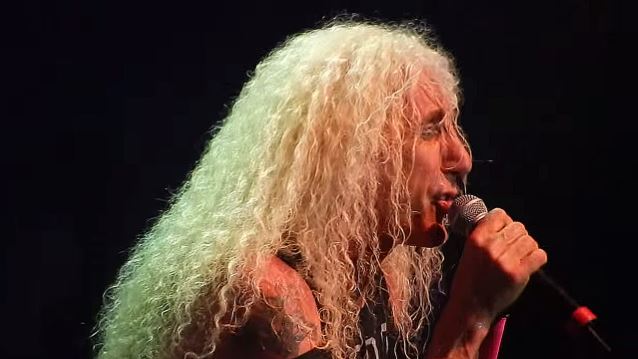 TWISTED SISTER frontman Dee Snider will release a career-spanning compilation, "Rock And Roll Ain't Dead - Dee Snider Essentials 1983-2015", in March through Rhino. The collection will feature music from all of Snider's projects over the years — including TWISTED SISTER, WIDOWMAKER, DESPERADO, VAN HELSING'S CURSE and DEE DOES BROADWAY — as well as three brand new songs.

Speaking to Canadian rock journalist Mitch Lafon of the "One On One With Mitch Lafon" podcast (Facebook page), Snider said about how the new solo material came together (hear audio below): "My solo guitar player; his name is Nick Perri. He played with a band called SILVERTIDE, he played with SHINEDOWN, [and] he played with Perry Farrell. He's a young gun and he's just a fucking dream. I've known him for a long time, and he's a guitar player that I just marveled at, watching him play. And as life came together, he wound up filling in for a solo show. And after the show, my crew and everybody were blowing my phone up and they said, 'You found your Randy Rhoads.' And I said, 'What?' They go, 'Nick Perri is your Randy Rhoads.' I said, 'At 60, I found my fucking guy?' I'm done, man. I'm fucking done. Now I find my guy?' He goes, 'Dude, it was amazing. The two of you, he complemented you, but he didn't… He worked with you, not against you, he didn't clash with you. He complemented the band. He elevated the entire solo band. It was amazing.' And so I went home. And I love Nick. And I was talking to my wife and my son, and I was telling them about the weekend, and they said, 'Why don't you do it?' I said, 'Do what?' They said, 'Why don't you put out some new music with this guy?' I said, 'Are you fucking nuts?' And my son said, 'I haven't seen you talk like this about anything musical in decades.' My son said, 'Dad, as long as I've lived, I've never heard you talk like this.' And [my wife] Suzette said, 'I haven't seen you have any kind of excitement when it comes to music.' It wasn't something odd, like 'Dee Does Broadway', or something, where it was just like a challenge. And I said, 'Really?' So I call up Nick. I said, 'Nick… You got any…?' 'Cause I haven't written new music in decades. I said, 'You got any songs?' He says, 'Three hundred. They're just missing vocals.' I said, 'You have three hundred songs with no vocals?' he goes, 'I can't write melody.' So he's sending me the stuff, and it just speaks to me. And I call him back. I said, 'Dude, did you strip out vocals?' Because, unlike normally, when guitar players write music, guitar players hate a vacuum; they've gotta fill it with fiddling around. He goes, 'No. I just hear where the vocals should go. I just don't hear what the vocals should be.'"

He continued: "There are three new songs on there. One's called 'Rock And Roll Ain't Dead', which my son Jesse wrote. I've always loved the song, and it was my rebuttal to Gene Simmons and when people say the music scene is so dead. Then there's 'Soul Lady', and then there's 'To Hell And Back'. Those are the three new songs that are already recorded, and they will be on the retrospective record, and there may even be a fourth. I'm actually working with a very contemporary writer now, who is on a mission to write me a new anthem that's going to appeal to new generations. And he's approached me about recording a song that he's working on. So there may be a fourth. So there's gonna be new music for the first time."

Dee added: "Quite honestly… it's really just testing the water. Because we've talked about doing an album, and I said, 'Nobody's buying albums.' I said, 'Who knows if anybody is even fucking interested?' So [if] we put out this thing, and people react to the new material, and there's a positive reaction, it could lead to a more extensive… 'Cause Nick and I just connect. As a writer, he's very old school, but he's got a lot of new-school influences as well.

"Anyway… So you may hear more Dee Snider solo. And that's really the direction, if I'm doing [anything] musically, I'm heading in."

Dee then clarified: "I'm not leaving TWISTED SISTER; I wanna be clear. We've got four shows together this year — maybe five or six now this summer — but I'll be doing a lot more solo shows this year."

A new TWISTED SISTER song, "30", appeared on the 25th-anniversary re-release of the band's classic album "Stay Hungry" in 2009. The track was described as an autobiographical take on the New York group's storied history in the world of heavy metal.