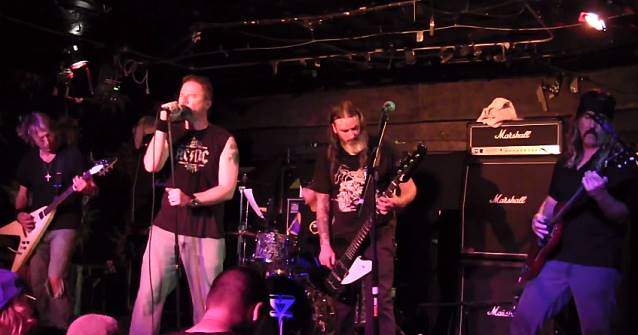 Metal Kaoz recently conducted an interview with guitarist Rick Wartell of Chicago doom metal legends TROUBLE. A couple of excerpts from the chat follow below.

Metal Kaoz: Have you done any writing or you just have some ideas? Where are you standing on that matter?

Rick: I think we have 8 or 10 songs written at this point for the new TROUBLE album and we're gonna continue writing; we like to have a few extras in our bag, so we can pick and choose the stronger songs. In my opinion, a lot of them are completed and we just maybe need to do a little tweaking here and there but yeah, the writing process is in full swing and we're getting close.

Metal Kaoz: When did you start writing, because "The Distortion Field" took a long time to be released, so now you're talking you have already that many songs…

Rick: Right. It's gonna be basically the same thing for this release; Bruce [Franklin, guitar] and I have already gotten 8 to 10 songs written and Kyle will put his vocals on those songs and I do know that Kyle has a couple of songs that wants to present to us and we're more than willing to listen to those and see if we can work them in and fit to the scheme of the album at this point. But yeah, Kyle is a very talented guy — we would never say "no" to any of his ideas.

Metal Kaoz: And what about the ballpark of the release date; do you have a timetable in your mind?

Rick: Personally, I'd like to have the album recorded by the end of the summer of 2015 and released it in the fall. That being said, you know how things go with this band, so that would be pretty optimistic [laughs], but let's shoot for this anyway.

Metal Kaoz: Do you have a working title for the new album?

You can read the entire conversation at Metal Kaoz.