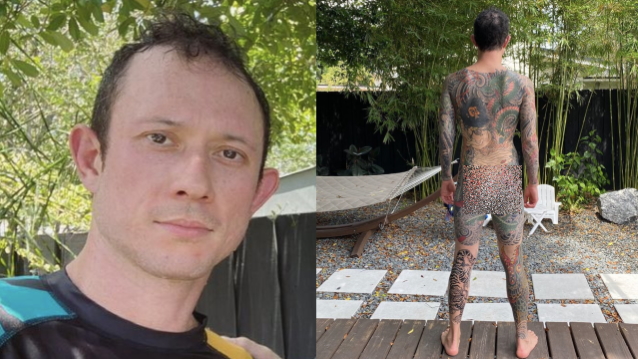 TRIVIUM's Matt Heafy has updated his fans on his quest to get his entire body tattooed.

The 35-year-old Orlando, Florida-based musician, who got his first tattoo in 2005, has revealed that his full bodysuit is close to completion — he's already inked his back, legs, arms and buttocks.

Earlier today, Heafy took to his Instagram to share a photo of his progress, and he included the following message: "Bodysuit progress:

"Back: Yoshitoshi - Susanoo v Yamato no Orochi by @kahlil_rintye

"Right lower leg: Kuniyoshi - Minamoto no Tametomo Rescued by Tengu (Wanizame only so far) by @davidbruehl

A few years ago, Heafy told Tattoo.com in an interview that the music industry has "definitely made tattoos a more acceptable thing in popular culture. I think that before music became an 'industry,' it was the ancient Japanese who influenced tattoos by turning them into an art form," he explained. "Unfortunately, now it seems like Japan is regressing to being against tattoos. But with the rest of the world, I think it's funny because of all the stereotypes about tattoos kind of work. For instance, if you see a person who looks like they're in a band and they're covered in tattoos, chances are they're probably in a band. I think it's a great thing that tattoos allow bands to express themselves — and in this sense, the music industry doesn't have the same limitations that other industries have. I also think that music is another way people can express themselves and who they are as a person."

Heafy also discussed some of his specific tattoos, saying: "My right arm was my first piece. It's Brian Bruno's representation of an early Japanese piece by Kitagawa Utamaro. It was called 'Ascending Dragon'. That was when our album 'Ascendancy' was about to come out; it felt like the stars aligned. Kitagawa Utamaro was known more for his pieces of Geishas; I had never really seen him do a dragon piece. After doing years of research on a wooden triptych of the dragon, I had Brian do this piece. I thought he would be the best American tattoo artist to do Japanese tattooing. From there, Kahlil [Rintye] moved into Brian's spot (Kahlil was also trained in Japanese tattooing). He ended up doing my second tattoo, which is on my left arm. It is an interpretation of an old piece in Japanese storytelling done by Yoshitoshi. It's of a samurai named Watanabe no Tsuna fighting Ibaraki no Doji at Rashomon gate. I believe that piece was created in the 1700s or 1800s, so I had Kahlil basically duplicate it on my left arm. Then I have my wedding band tattooed on my left hand, and that's a Japanese 'Ensō,' which is an existentialist symbol based on the philosophies of perfection, imperfection, completion, and incompletion."

Heafy was born in Iwakuni, Japan to a Japanese mother and an American father. His father, formerly a member of the United States Marine Corps, is half Irish and half German. After wrapping up his enlistment at Camp Pendleton, Heafy's father settled his family in Orlando, Florida, where Matt's budding love of music began to flourish.