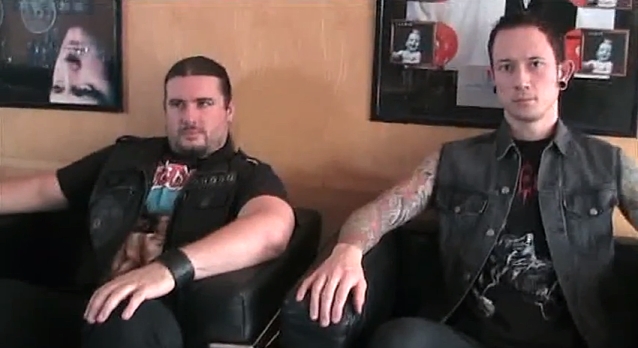 Guitarist Corey Beaulieu and guitarist/vocalist Matt Heafy of Florida metallers TRIVIUM were in Italy recently to promote "Vengeance Falls", the band's upcoming album. Paolo Bianco of Soundsblog.it met with the duo and showed them a bunch of photos of the band taken through the years, asking the musicians to recount their memories associated with each image. The resulting footage can be seen below.

To check out high-resolution versions of the photos, visit Soundsblog.it.

TRIVIUM's "Strife" video will make its online debut on Monday, September 9. The clip was filmed in July at Studio One in Orlando and was directed by Ramon Boutviseth, who has previously worked with NONPOINT, DARKEST HOUR, INCUBUS and ALL THAT REMAINS, among others. Check out photos from the video shoot at this location.

"Vengeance Falls" will be released on October 15 via Roadrunner Records. Produced by David Draiman (DISTURBED, DEVICE), the follow-up to 2011's "In Waves" is available for pre-order at Trivium.org. The first single, "Strife", is available as an instant download with all pre-orders.

TRIVIUM will hit the road in North America later this month with DEVILDRIVER, AFTER THE BURIAL and SYLOSIS.