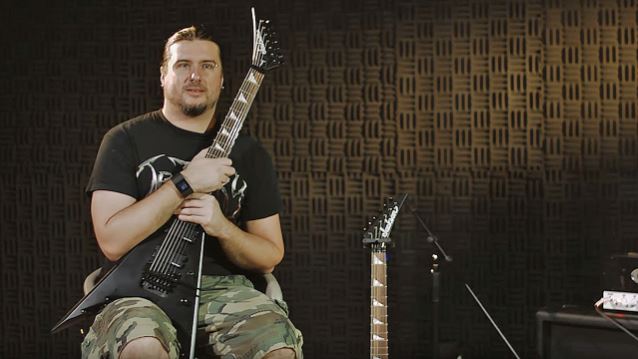 Brian Giffin of Australia's Loud magazine recently conducted an interview with guitarist Corey Beaulieu of Florida metallers TRIVIUM. A couple of excerpts from the chat follow below.

Loud: "Silence In The Snow" has been getting some of the best press that I think I have seen to a TRIVIUM album. You must be pretty pleased with that.

Corey: I guess we're pretty numb to criticism now. With every record that we've put out, we're doing something different, or we at least try some new things. We never settle for repeating ourselves. Whatever you put up, people are going to rip on it for whatever reason. People are gonna love it for their reasons. We don't really pay much attention to that. Long term, when you put out new stuff, you're gonna get reactions on both sides of the fence. Now that the record's been out for a while, a lot of people are, like, "I don't like this. This isn't what I expected." We've never gonna give people exactly what they're expecting, whatever they've built up in their brain of what they think the record's gonna be. The single on the radio is almost breaching the Top 10 radio charts, so it's reaching a lot of people who are just discovering us. That's exciting, because even though we've been around for ten plus years and seven records, there's still a shitload of people who have never even heard of us!

Corey: We wanted to do the record at home in Orlando this time. We always knew about Michael as he's kind of a friend of mine that I would hang out with when I went out to bars and stuff. He's part of my group of friends. We really liked his stuff, the ALTER BRIDGE record he produced, the Slash record is killer, and he's here in Orlando so it was pretty good fit. He's working here and he has a studio here, so we hit him up and he was interested, as he's always been a fan of the band. So we got together to see what the vibe was like and then we played him some of the demos that we had, and he that where we were coming from and what we were looking at doing with the record had the some kind of influences as far as fans and as musicians that he was inspired by when he was growing up. There was a little common ground with what we were inspired by and he seemed like the best fit. Since the early days, with every record, once we've figured out what we're trying to achieve sonically and the vision of the record, we've tried to find a producer that seems to be the best fit for that particular album. So it was really fun. He's a guitar guy and a song writer as well, and a great singer. He's just a really good fun. We had a lot of fun tracking guitar solos and working on guitar stuff with him.

Loud: TRIVIUM has always been a band that's never shy about acknowledging their influences. You've talked a lot this time about how "Silence In The Snow" was inspired by heavier bands from the '70s.

Corey: Well, our influences while we were growing up were a lot of the early '80s — and I'm sure people have this a bunch of times — METALLICA, IRON MAIDEN, MEGADETH, that movement of metal. That's what we grew up with that influenced us as players. When we got older and we went back in time to try and discover new music, just as music fans, I was always into DIO and now more recently I've got more into SABBATH, RAINBOW... a lot of the stuff that created the METALLICAs, the MEGADETHs of the world. A lot of this '70s stuff — like KANSAS! Music that has all this great vocal melodies and guitar parts. Even the songs were considered radio songs, there was just a lot more musicianship and song writing in a lot of that music. There wasn't this fabricated pop bullshit where there's one chord progression in a song, and that's it. All of us kind of got inside that era of music that paved the way for the bands that followed. They didn't have a rule book about how to do it. They just kind of created their own destiny with their own sounds and making new sounds that no one had heard before. That kind of expanded the music scene. We were trying to channel the way that affected us and bring some of that energy into our music so that when people hear our record it has some level of effect on them! That the music that inspired had on us.

You can read the entire interview at Loud magazine.