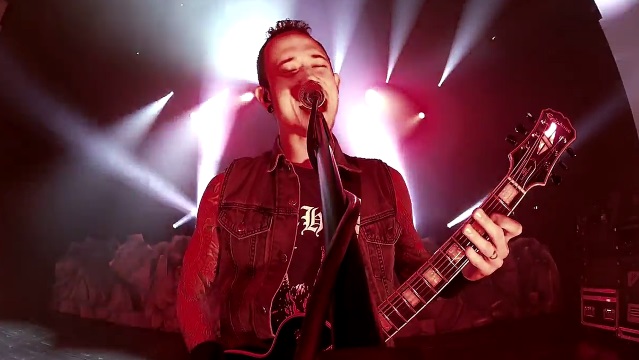 "Through Blood And Dirt And Bone", the new video from Florida metallers TRIVIUM, can be seen below. The clip was filmed and directed by Luke Daley.

"Through Blood And Dirt And Bone" is taken from TRIVIUM's new album, "Vengeance Falls", which made Top 10 chart debuts in Japan, Australia, Germany and Austria as well as a Top 15 debut in Canada and a Top 25 debut in the United Kingdom. This marked the acclaimed metallers' second consecutive Top 15 debut in the U.S. and highest-career debuts around the globe — including a No. 2 debut in Japan.

"It just wasn't working out and we just felt it was time to… At that time, it was best to go our separate ways instead of trying to keep going on and then something happening and having an effect on shows or anything like that," TRIVIUM guitarist Corey Beaulieu told the Impact metal channel. "[The split] was very calm and chill, but it just needed to happen. Sometimes, after awhile, things just aren't going the way you kind of hope for and you've gotta make a switch. It's a pain in the ass to switch members and get someone up to speed. But Mat's been doing great. He came into the role and he's been doing a great job playing the songs and playing the shows. It was pretty smooth considering the circumstances — being in the middle of a tour and having to get a new drummer up to speed in 24 hours. But it was just something we had to do just to make sure that, moving forward, everything was tip top, 100 percent ready to roll."