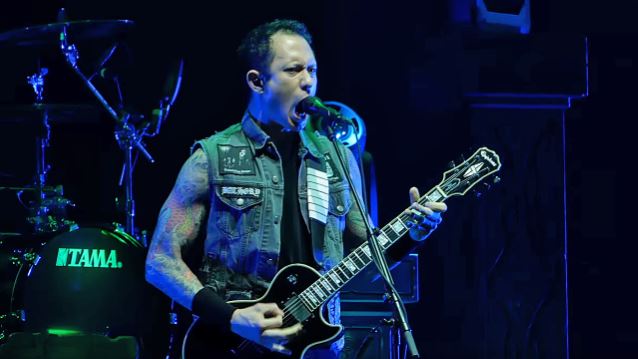 Quality fan-filmed video footage of TRIVIUM's June 7 performance at Rockhal in Esch-Sur-Alzette, Luxembourg can be seen below.

TRIVIUM guitarist Corey Beauileu was recently asked by Spotlightnews.com if the band has already begun writing material for the follow-up to last year's "Silence In The Snow" album. He responded: "You know, we're always writing during our down time. We don't really write that much anymore [while we're] on tour. Maybe if we just get an idea or something, but a lot of the stuff that we write nowadays is when we have breaks at home. Usually somebody writes a song, or at least gets an idea down. We don't wait till we have to start writing a record. We're just constantly writing, all the time, because it's just something we like to do. So, we have a lot of material already. Once we start thinking about a record, we'll dive through it all and figure out what in the pile is what we're looking to do for the direction of the record. Hopefully, we're thinking about a record sometime next year. I think we'll be in the timeframe for that."

Corey also talked about the evolution of TRIVIUM's sound away from the screaming/growling vocals that characterized some of the band's earliest efforts. He said: "We've had the screaming element, sound, from the beginning. We've kind of grown. We have a broad sound. We really like the melodic side of things, and we can go to aggressive, the heavier side of metal. We've always had both elements, and then we've just used them in different ways. It's given us a variety of different songs and not being stuck with having to use screaming all the time. We're able to sing as well."

He continued: "For us, the metalcore thing was kinda the big label when we first came out, because the scream-sing thing was popular for that point and time. Over time, we've expanded our sound and done a lot of different things, so that label doesn't really fit us for a style of metal. We just say we're metal because we bring so many different elements of metal and rock in general. The screaming thing, we just use when ever a song calls for it, where the part just really needs it. But we don't really use it all the time. So, it's definitely something of a tool in the tool kit. It's not something that overall defines what we do."

"Silence In The Snow" was released on October 2, 2015 via Roadrunner. The follow-up to 2013's "Vengeance Falls" was produced by Michael "Elvis" Baskette (SLASH, ALTER BRIDGE, THE AMITY AFFLICTION) and was mixed by Josh Wilbur (GOJIRA, LAMB OF GOD).