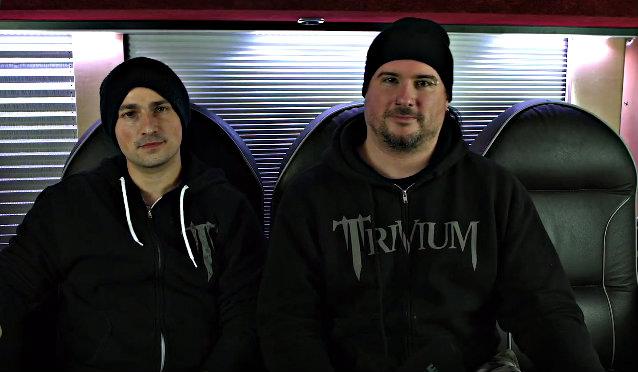 On March 11, Germany's Grasser Production conducted an interview with TRIVIUM guitarist Corey Beaulieu and bassist Paolo Gregoletto in Munich, Germany. You can now watch the chat below.

Asked why it has been so difficult for the band's core trio — Beaulieu, Gregoletto and guitarist/vocalist Matt Heafy — to keep a drummer in the last few years, Paolo said: "I don't know. Alex [Bent; BATTLECROSS, DECREPIT BIRTH] is touring with us right now, and we're not rushing into anything. We wanna make sure he likes the situation, he likes the songs. We're having fun touring with him, he's an incredible drummer, and once we get done with the touring, we'll see what happens next. The other guys, we just rushed into every situation, so we're not making the same mistake for a fifth time. We decided to learn from our lessons, which is give it some time, tour with the dudes, see how they actually are on tour, 'cause that exposes a lot about people's personalities and playing. And we're just kind of taking it as we go. Matt, Corey and I have been doing it for so long, we have a set way we like to do things. We're very demanding of each other and of ourselves and our playing and how we are on tour, and we expect nothing less from whoever is behind us on the kit. And thankfully, Alex is a super-pro player, great person, [he's] crushing it live, [and he has] a lot of experience."

Bent's predecessor, Paul Wandtke made his live debut with TRIVIUM in December 2015 at Knotfest in Mexico. A short time later, he appeared in an official promotional photo with the three core members of the band.