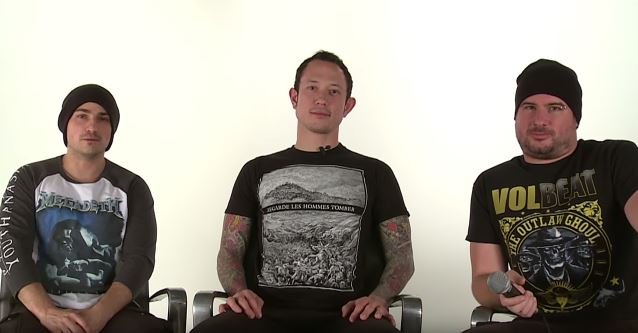 Fresh from the "HardDrive Live" tour with TREMONTI, Matt Heafy, Corey Beaulieu and Paolo Gregoletto of the Florida metal band TRIVIUM came by the "HardDrive Radio" studio to talk about the tour's best moments, pranks and their guilty pleasures. Check out the clip below.

TRIVIUM's new album, "Silence In The Snow", debuted at No. 19 on The Billboard 200 chart, having shifted 18,000 equivalent album units in the week ending October 8.

TRIVIUM will head straight to San Bernardino, California for an October 24 main-stage performance at this year's Knotfest, headlined and curated by TRIVIUM's labelmates SLIPKNOT.