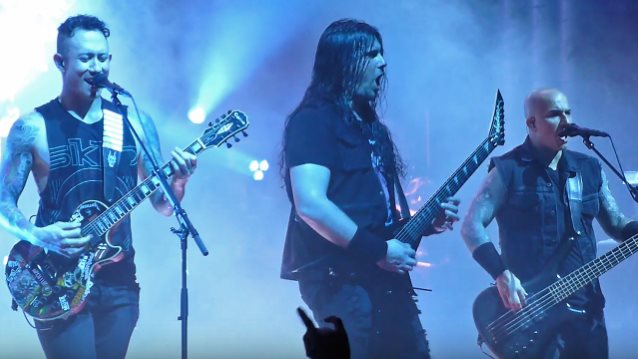 Florida metallers TRIVIUM will enter the studio later this year to begin recording their new album. Guitarist Corey Beaulieu told Static Age TV during a March 7 interview in Leipzig, Germany about the progress of the songwriting sessions for the follow-up to 2015's "Silence In The Snow": "This is our last tour for 'Silence In The Snow', so, obviously, the next thing we'll eventually be doing is working on new material. But it's too early to say anything about… We won't know when it's gonna come out until we've actually finished it. So until we get in and start recording it and then putting everything together, there's not really anything you can say at this point except eventually there will be a new record. We just can't say really much about it. [Laughs]"

Madiro was the featured drummer on "Silence In The Snow", which was released in October 2015 via Roadrunner.

Bent made his live debut with TRIVIUM on February 11 in Dublin, Ireland.

"Silence In The Snow" debuted at No. 19 on The Billboard 200 chart with first-week sales of 18,000 equivalent album units. The follow-up to 2013's "Vengeance Falls" was produced by Michael "Elvis" Baskette (SLASH, ALTER BRIDGE, THE AMITY AFFLICTION) and was mixed by Josh Wilbur (GOJIRA, LAMB OF GOD).