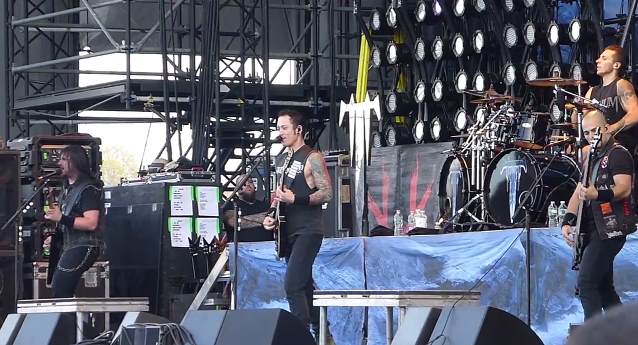 XplicitConcerts has uploaded video footage of TRIVIUM's May 10 performance at the Rise Above Fest in Bangor, Maine. Check it out below.

TRIVIUM last week parted ways with drummer Nick Augusto due to personal differences. TRIVIUM bassist Paolo Gregoletto stated about the split: "We all agreed that what started out great 'off stage' in the beginning over time began to fray. It became obvious that things were not going to work out in the long run.

"We did not want to reach the point where the differences between us became apparent on stage.

"Being in a band is privilege afforded to us by all of you, and as much as we owe you guys the best show we can possibly give you, we also realize that being out here has to be enjoyable enough for us to continue to do so."

Stepping in for Augusto on TRIVIUM's current dates is the band's drum tech, Mat Madiro.