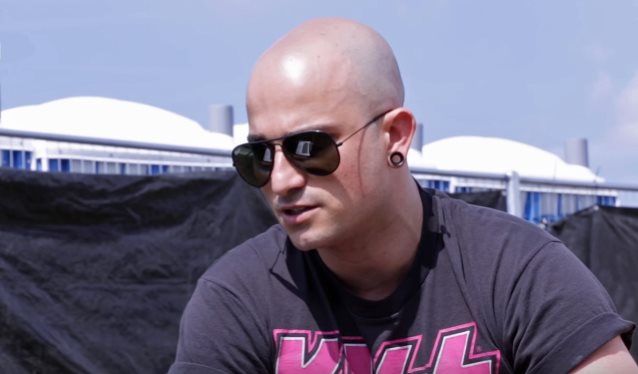 Austria's Mulatschag TV recently conducted an interview with bassist Paolo Gregoletto of Florida metallers TRIVIUM. You can now watch the chat below.

Speaking about how streaming has changed the way an increasing number of people now listen to music and the way it has affected record sales, Paolo said: "We're already well on our way to doing pretty good on [the streaming] front, and I think it keeps growing.

"I just am really excited where the next ten years goes — not only for our band but for music.

"I'm on the optimistic side of where streaming is gonna take music.

"I feel like people… People are not just being turned into consumers and buying stuff; it's more about discovery, about becoming what I feel like musicians have, which is you have such a love for music and discovering new stuff and trying new things. It's shifting that mindset on to the people that buy and stream. Make them love music, make them passionate about discovering.

"I think things are gonna change big time and for the better.

"I'm glad that we could be a part of it and that we're on the forefront of where music is gonna go from here on out."

Paolo also talked about the way technological advancements have given consumers access to music from a variety of portals while making it harder than ever for artists to make a living directly off their music.

"There's a lot to work out; there's a lot of unknowns and fears about it," the bassist said. "But you have to kind of find your way through it. It's never been easy.

"I don't think being in music has ever been… There was never a point where it was, like, well, you could just become a musician and it was like having a 9-to-5 job. You've gotta put a lot in, and you're risking everything without any guarantee or any safety net.

"For me, it's, like, well, if we're gonna be in this, let's really take advantage of everything that's coming out — whether it's technology in music, anything."

TRIVIUM's latest album, "Silence In The Snow", was released on October 2, 2015 via Roadrunner. The follow-up to 2013's "Vengeance Falls" was produced by Michael "Elvis" Baskette (SLASH, ALTER BRIDGE, THE AMITY AFFLICTION) and was mixed by Josh Wilbur (GOJIRA, LAMB OF GOD).