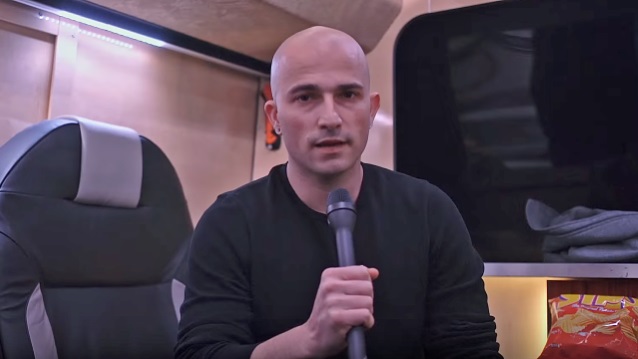 Kaaos TV conducted an interview with bassist Paolo Gregoletto of Florida metallers TRIVIUM prior to the band's March 19 performance in Helsinki. You can now watch the chat below.

Speaking about the fact that the Internet gives us the opportunity to be whoever we want to be, say whatever we want to say and listen to whoever we want to listen to without facing the same consequences as we would have in real life, Paolo said: "It's sort of, like, be careful what you say, and be ready to back up what you say. I try my best to say things that I wouldn't feel bad about saying it later. Or if something doesn't feel like it would translate well online — some jokes or sarcasm — unless it's explicitly stated, which is not even guaranteed anything. Say it, but you'd better be really sure you wanna say it.

"I feel pretty good about what I say on social media, because if I feel any sort of, like, 'I shouldn't say this,' I won't say it," he continued. "Even if I'm, like, 'Well, maybe someone will get it,' no. Not everything is meant to be blurted out in public. I just look at it, like, let me go into the middle of a town square and just say something. Would I say it there? Would I say it to someone's face? Do I really need to say this? Those are kind of the things I think about. And maybe everyone should do that. But at the same time… You should be allowed to say whatever you want, but also you should be allowed to be shit on by other people if they think you said something stupid. That's the beauty and the bad part of the Internet — everybody can say everything, and that's the consequence: people telling you you suck if you say something they don't like. But whatever. For me, yeah, if I don't feel comfortable saying it out loud in person, I wouldn't say it on the Internet."

Gregoletto recently got in a Twitter fight with Phil Labonte after the ALL THAT REMAINS singer appeared on Internet provocateur Milo Yiannopoulos's InfoWars show to discuss the contentious issue of U.S. gun control in the wake of last month's mass shooting in Florida.

TRIVIUM's eighth album, "The Sin And The Sentence", arrived last October via Roadrunner.