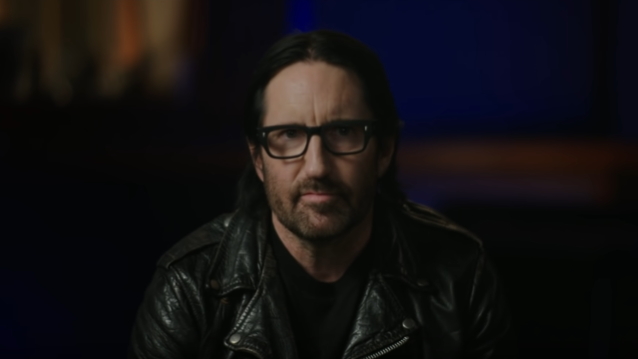 Trent Reznor has issued a statement distancing himself from his former friend and collaborator Marilyn Manson. The statement, shared with Pitchfork, comes days after Manson was accused by several women of abuse and assault.

Reznor signed Manson's band to his Nothing Records label and produced the shock rocker's first two albums in the 1990s, but their relationship soured more than two decades ago. In a 2009 interview, Reznor called Manson "a malicious guy" who will "cross any line of decency." More recently, a excerpt from Manson's 1998 autobiography "The Long Hard Road Out Of Hell" resurfaced on social media in which Manson recounted a scene where he and Reznor allegedly assaulted a drunk woman together the night before Trent told Marilyn that he wanted to sign him.

Earlier today, Reznor issued the following statement: "I have been vocal over the years about my dislike of Manson as a person and cut ties with him nearly 25 years ago. As I said at the time, the passage from Manson's memoir is a complete fabrication. I was infuriated and offended back when it came out and remain so today."

Trent worked on Manson's 1994 debut album, "Portrait Of An American Family", as well as the follow-up release, 1996's "Antichrist Superstar".

Speaking to Mojo magazine 12 years ago, Reznor stated about Manson: "He is a malicious guy and will step on anybody's face to succeed and cross any line of decency. Seeing him now, drugs and alcohol now rule his life and he's become a dopey clown."

Manson claimed in 2017 that he and Reznor had reconciled. "He's the one who actually sent me an e-mail," he told Zane Lowe. "We had sort of mended ways after a long time through [Manson's collaborator and producer] Tyler Bates, strangely enough. He said in the e-mail something along the lines of, 'It really pisses me off that music's not dangerous anymore, and it reminds me of how great you were and I was, and the time, the era.'"

On Monday (February 1), "Westworld" actress Evan Rachel Wood claimed that Manson "groomed" and "horrifically" abused her for years. After she shared her accusations, at least four other women posted their own allegations against the singer. The women claimed to have endured "sexual assault, psychological abuse, and/or various forms of coercion, violence, and intimidation" at the hands of Manson.

Several hours after Wood went public with her allegations, Manson's most recent record label, Loma Vista Recordings, issued a statement discontinuing its relationship with the singer.

"In light of today's disturbing allegations by Evan Rachel Wood and other women naming Marilyn Manson as their abuser, Loma Vista will cease to further promote his current album, effective immediately," the label said. "Due to these concerning developments, we have also decided not to work with Marilyn Manson on any future projects."

On Monday, Manson issued a statement denying the abuse allegations leveled against him, writing on Instagram: "Obviously, my art and my life have long been magnets for controversy, but these recent claims about me are horrible distortions of reality. My intimate relationships have always been entirely consensual with like-minded partners. Regardless of how — and why — others are now choosing to misrepresent the past, that is the truth."

In 2018, Wood testified in front of a House subcommittee in an effort to get the Sexual Assault Survivors Bill of Rights passed in all 50 states.