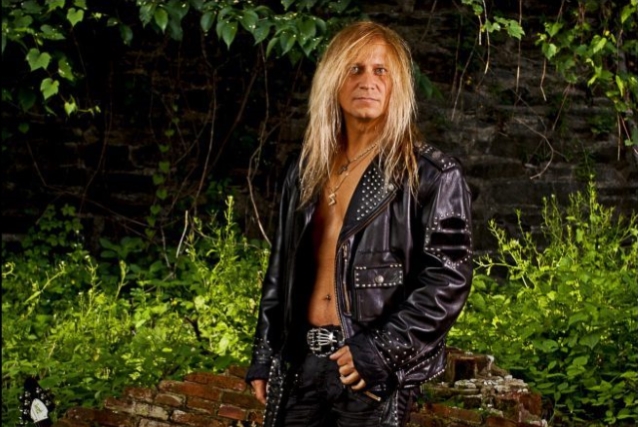 TRANS-SIBERIAN ORCHESTRA guitarist Chris Caffery says his solo song "Upon The Knee" is inspired by the recent U.S. national anthem protests. NFL players started protesting police brutality in 2016 by taking a knee during the anthem, setting off a flurry of debate across the country. While the issue has subsided considerably during the 2018 NFL season — due in large part to the limited number of players now kneeling — Caffery says it was something that really bothered him and that a sports venue was the wrong place for protest.

In a recent interview with Jess of the WSOU radio station, Caffery, who also is still a member of SAVATAGE, talked about the lyrical themes that are covered on his sixth and latest solo album, "The Jester's Court". "The first song, 'Upon The Knee', that song I wrote about the people kneeling to the national anthem," he said. "That's something that really bothered me.

"Everybody can have their own personal opinions, and you can protest things as much as you want, but I think there's certain times it doesn't need to be done," he added. "And when you're looking at a football field and it's a military day and there's a bunch of soldiers holding an American flag during the game, don't use that time to protest your opinion on police. That kind of bothered me."

In September 2017, President Donald Trump called for a boycott of the NFL if team owners did not take action against players who did not stand during the national anthem. He had said that a player who kneeled during the anthem was a "son of a bitch" who should be taken off the field.

The controversy started simmering two years ago when former San Francisco 49ers quarterback Colin Kaepernick was the first to kneel during the national anthem. Kaepernick opted out of his contract with the San Francisco 49ers at the end of that season and hasn't appeared on a NFL roster since, leading many to wonder if his inability to receive a job from NFL teams is related to the public backlash over his protest.

Players who have gotten on one knee during the anthem have said that it is a form a protest against police shootings and racial injustice.

A number of musicians and celebrities have shown their solidarity with the athletes for not standing during the anthem. PEARL JAM offered support for "everyone's constitutional right to stand up, sit down or #takeaknee for equality," while LIVING COLOUR guitarist Vernon Reid pointed out in a tweet that the protests aren't against the flag or the anthem but institutionalized racism. PEARL JAM frontman Eddie Vedder and PROPHETS OF RAGE are among the artists who have posted pictures or videos of themselves "taking a knee" in concert. Others, like STRYPER frontman Michael Sweet, have said that players should just "play ball and do the job that you get paid millions and millions of dollars to do."

"When you use the banner under which they fought as a source for your displeasure, you dishonor the memories of those who bled for the very freedoms you have," Nugent wrote in the post.

Ted also expressed displeasure with the players for disrespecting what the flag stands for.

"That's what the red stripes mean," he wrote. "It represents the blood of those who spilled a sea of it defending your liberty."

Nugent went on to suggest that by not standing during the national anthem, the players didn't honor the sacrifices made by so many veterans.

"You haven't an inkling what it took to get you where you are; but your 'protest' is duly noted," he wrote.

"The Jester's Court" was released in July via Metalville Records.